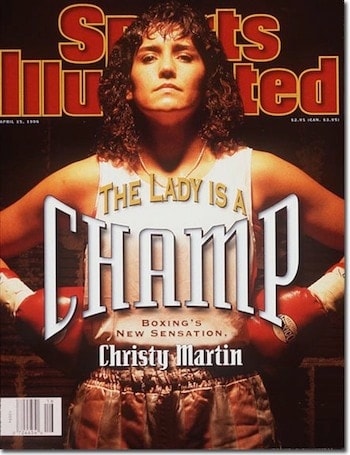 Christy Martin, on the cover of Sports Illustrated. April 15, 1996.

October is Domestic Violence Awareness Month. As a way to bring attention to this very serious issue, which affects one in four women at some point in their lifetime, several domestic violence survivors traveled to Washington, D.C., along with advocates from Mayors Against Illegal Guns, to pressure lawmakers into supporting measures that would expand background checks for gun purchases and prohibit individuals with a temporary restraining order from being allowed to buy firearms.

One of the group’s advocates is boxing legend Christy Salters Martin, who knows firsthand what it’s like to be in an abusive relationship. In 2010, after telling her husband and former boxing coach James Martin that she planned on leaving him for a woman, James Martin sliced her in the leg, stabbed her in the chest and shot her in the back with her own firearm. She was lucky enough to make it out alive.  And the traumatic experience has changed the way she views gun ownership in relation to domestic violence.

Christy by all accounts is a tough cookie. She was a professional boxer and a licensed concealed carry permit holder. However, her enraged husband still got the best of her that day.

“I was shot with my own gun. Just putting a weapon in the woman’s hand is not going to reduce the number of fatalities or gunshot victims that we have,” Christy said. “Too many times, their male counterpart or spouse will be able to overpower them and take that gun away.”

According to a Mayors Against Illegal Guns “Fact Sheet,” the presence of a gun in domestic violence situations increases the risk of homicide for women by 500 percent and in states that require background checks for all gun sales, including private transfers, 38 percent fewer women are shot to death by intimate partners. And of the women murdered by firearms in this country in 2011, 44 percent of them were killed by a current or former intimate partner.

“These things are going to continue to happen until Congress steps up and changes these laws,” Christy told ThinkProgress. “And in order for them to act, it’s going to take people like me, survivors, to stand up and say: Be more aware of the gun laws.”

What laws can Congress enact to help protect women from domestic abusers?

Well, as mentioned, from MAIG and Christy’s perspective Congress could approve a universal background check bill that would require criminal background checks for firearm transfers or sales made via the Internet and at gun shows. 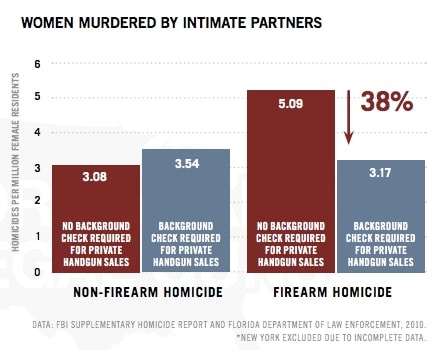 While all gun owners would agree that domestic abusers should not have access to firearms, the problem with trying to solve this issue legislatively is that crafting a law that toes the line between protecting the rights of responsible gun owners and making it more difficult for violent spouses to obtain guns is not an easy task. Some would argue that in some cases, vengeful spouses purposely abuse the law and file restraining orders against their exes, who may be responsible gun owners. In these instances, depriving them of their right to keep and bear arms for self-defense on a baseless or embellished allegation is wrong and may end up leaving them vulnerable.

The said, there is common ground on this issue. Gun owners and gun control advocates can both agree that one of the best ways to prevent domestic violence is to encourage those in abusive situations to seek help, to talk about it, to contact the authorities when things get out of hand. Moreover, to get people who are aware of abusive situations, i.e. a friend, family member, to be more engaged. ThinkProgress cited a study that found that “64 percent of Americans agree that talking more about these issues would make it easier for them to feel comfortable stepping in and trying to help someone in the midst of an abusive relationship.”

The more we talk about the issue, the more active we are in pointing it out when we see it, the more lives we will save. Guns or no guns in the home, violent individuals will continue to act violently until they are stopped. The goal should be to stop them before they do it again.