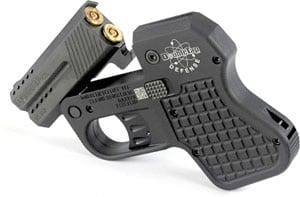 We’re gearing up for a review I’ve been looking forward to for more than a year.  DoubleTap, the hard-on-your-hand .45 ACP take on the classic derringer, is in-bound.  It should be here next week.  I’ve got boxes of ammo waiting and I’m feeling a bit masochistic.

It has been a long wait.  Still, I love novelties and oddities and genuine innovations, so I’m being patient

While I’m waiting, I’ve been going back through some of the DoubleTap’s predecessors, checking out the way things used to be not that long ago, and I was wondering what ever happened to the Mossberg Brownie?  As much as I like the promise of an over-under .45 ACP, I’d sure like to have the option of four barrels. 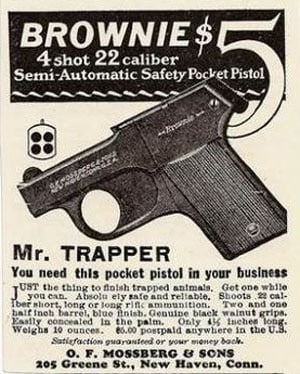 The history of the Brownie is fascinating.  It was Mossberg’s first gun.  It is, to date, their only pistol.  The Brownie was introduced around 1919 or early 1920, and was in production until 1932.  By that time, the Mossberg .22 rifles had taken over and production of the Brownie stopped.

The gun is small: 4.5 inches long.  The barrels are just 2.5 inches.    Despite its size, it still has four barrels.  When the trigger is pulled, the hammer cocks and falls on a rotating firing pin that progresses sequentially from barrel to barrel.  It doesn’t have much in the way of mass, at only 10 ounces, but it shoots rounds as light as .22 shorts, one at a time, so recoil isn’t really an issue.  For a gun that’s so decidedly small, it is wide (owing to the alignment of the four barrels in an over/under and side-by-side fashion). 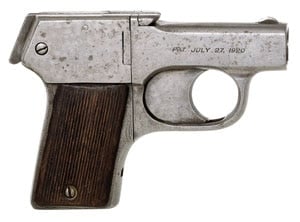 A Brownie, devoid of its bluing.  (Photo credit: Cowan Auctions)

The latch that holds the barrels to the frame protrudes from the back of the gun.  It is easy to open, and allows for rounds to be extracted.  The extractor came separately.  It was just a piece of bent steel you could use to pry out sticky shells.  But what would you expect for $5.00 (which included the cost of shipping).  That’s roughly $60 today. 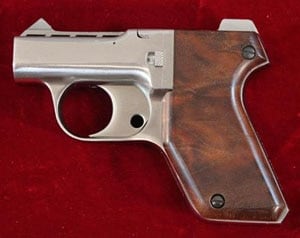 Their pattern was a direct knock off of the Brownie, though Advantage Arms dressed it up a bit.  The 422 had stylish grips.  The old Brownies were very angular.  Their grips were simple parallelograms of walnut with some grooves for texture.  The 422 extended the grip up the side of the frame, giving a more dramatic look to the pistol.

The most noticeable difference, though, was the addition of a sight rib and larger sights.  Why does a gun like this even have sights?  I guess if you are finishing off trapped animals, you may want a bit of distance between you and your target.  As a defensive pistol, though, the Brownie and the 422 weren’t meant to be aimed in the traditional sense.  They were excellent contact guns.

Look at some of the modern concealed carry pistols.  If you are pushing against your intended target, hard, you may inadvertently back the slide up the barrel .  If the gun isn’t in battery, it won’t fire.  Revolvers don’t have this problem, and neither do guns like the Brownie.  Even though it is just a .22, it still has some actual potential as a defensive weapon.

But we’re not done with the evolution of Mossberg’s design. 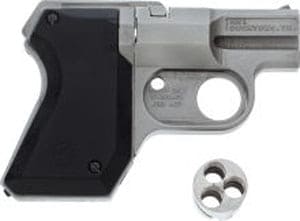 Here’s one that I’m surprised ever made it into production.  The Pocket Pal.  Though Cobray borrowed heavily from the Brownie, they made some serious changes.  The gun still has the compact size and aggressive shape.  It still breaks open like an old-school shotgun.  But it is, at its heart, a revolver.

You’d never guess.  But the cylinder is on the inside.  And it came with two cylinders.  The top barrel fired from a three shot .380 cylinder.  The bottom barrel fired from a five shot .22 LR cylinder.  Here’s where things get sticky.  After breaking open the gun, the removable cylinder had to be aligned perfectly.  Pulling the trigger cocked (and dropped, obviously) the hammer.  But instead of rotating a firing pin mechanism, it rotated the cylinder.  When the last shot was fired, it wouldn’t turn any more.  The gun had to be opened up and the cylinder removed, unloaded, reloaded, and placed back in the gun.

It’s easy to see why it didn’t catch on.  Even though it looked small, the gun was bulky, heavy, and made from less-than-stellar materials.  And it was slow to load.

The DoubleTap is obviously the next chapter in the saga.  While it isn’t so distinctly inspired by the Brownie, the spirit of Mossberg’s first gun lives on in the DoubleTap.  But we’re approaching a really big anniversary for Mossberg.  How will they celebrate?  I’d suggest a new Brownie.  And I’d like to see it priced at $60.00.  I’d carry one.  It would be just what I need to finish off trapped animals.