Police officer gets shot in the face, still gets suspect; Check out the dashcam video

Getting shot in the face wasn’t enough to stop law enforcement officer “Robocop” Ann Carrizales, a former Marine and boxer from Stafford, Texas.

It was a normal day in the uniform for the Stafford Police Officer when she initiated a routine traffic stop in the twilight hours on Saturday.

At nearly 3am, she pulled over a vehicle and had the “cop intuition” that something was amiss. As she approached her stop, the passenger of the vehicle unleashed hell, firing at and striking Carrizales multiple times. She was hit twice at point-blank range, sustaining a gunshot wound to both the cheek and the chest. Her vest stopped one round, but the other burned into her face, the Daily Mail reported.

“It wasn’t an option for me to give up. I am a mom and they shot me and they were absolutely not going to get away with, that, because I will do everything I can to come home to my children every day,” the mother of two said on the Today Show. 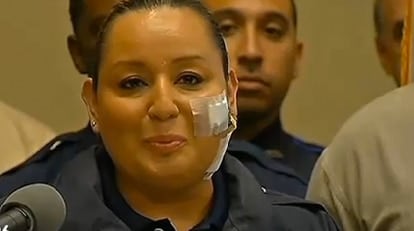 “Without a doubt, [the vest] saved her life. It just illustrates how quickly something can go bad for any officer at any time,” Stafford Police spokesman Dustin Claborn said.

Wounded but not incapacitated, the officer fired at the car as it sped off, obliterating the back window. Carrizales rushed back to her patrol vehicle, radioing in for back up as she pursued her suspect.

“I knew that it was what I needed to do, to catch these guys,” she said. “You can’t shoot me and drive away, it’s not allowed.” 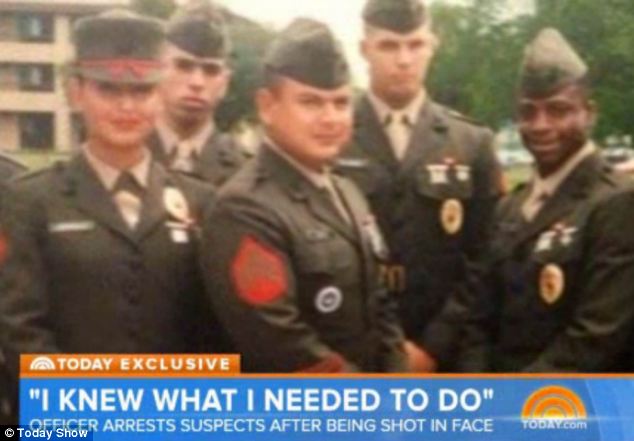 A former Marine and boxer, Carrizales is certified tough.

Stoic and defiant, Carrizales hotly pursued 28-year-old Freddy Henriquez. Officers from neighboring agencies joined in on the action, lending aid to the wounded hero. After a lengthy chase, Henriquez was captured after being cornered in an apartment complex.

It was determined after his arrest that Henriquez was wanted on a warrant for aggravated assault on a police officer, and was also reported to be a Honduras native wanted by Immigration and Custom Enforcement for illegally re-entering the U.S. as a violent felon. ICE stated Henriquez was believed to be a member of the Sureno 13, a merciless prison gang with ties to the Mexican Mafia.

Carrizales was hospitalized for her injuries but was later released. She is restricted to working in-house until she recovers from her wounds.

“I think it speaks highly of her character, her fortitude,” said police spokesman Dustin Claborn.

Members of the Stafford Police Department have given Carrizales the affectionate moniker of “Robocop” after her heroics, a kind nod to the nearly invulnerable Hollywood officer of lore.

Here’s video of the incident: