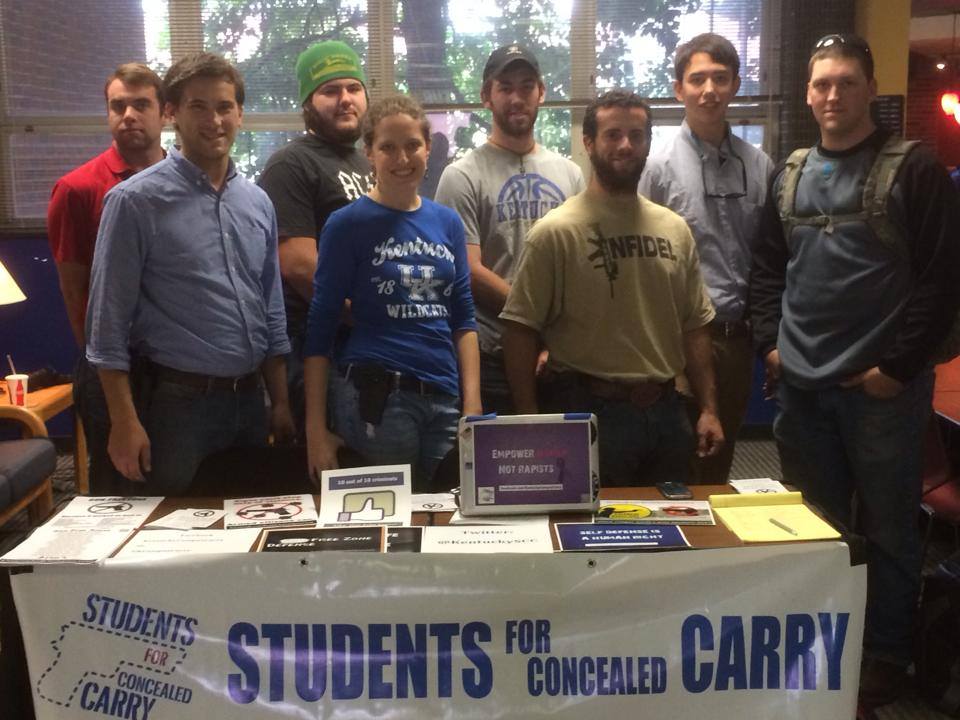 It’s a simple but earnest request: allow us to carry firearms for self-defense. That’s all the University of Kentucky Students for Concealed Carry would like, an opportunity to exercise their Constitutional right to keep and bear arms while on campus.

“Our basic goal is to get legislation passed through the state legislature to prevent public universities from telling students with concealed permits that they cannot carry weapons on campus,” the group’s director,  22-year-old Taylor Waide, said. “Our goal is to get attention and to get our mission out.”

On Tuesday, in an effort to build awareness about their cause, the group held a mini-demonstration outside a campus Starbucks. While there, they passed out fliers and educated their peers about the importance of being prepared to protect oneself in life-threatening situations.

Little by little they hope to win over hearts and minds until eventually the reach a critical mass to precipitate reform.

“U.K. is a big campus,” said Waide, a concealed carry firearms instructors. “It’s 30,000 students, and we are going to need a big resounding voice to affect change at the state legislature.”

“My teacher said she didn’t support it,” explained Waide. She said, ‘What if I gave a student a bad grade and they shoot me?'”

Waide replied, “What’s stopping him from doing that now? I can stop that mad man from hurting you and the class.”

A spokesman for the university, Jay Blanton, told Kentucky.com that the policy prohibiting concealed carry on campus has been in place for years: “no one is allowed to carry a weapon on campus.”

“That recommendation was offered years ago from safety officials and police to safeguard the campus,” Blanton explained.

Though, Blanton said he respects the group’s right to petition the university and the state legislature.

“We deeply respect that students have differing points of views on issues, including this one,” Blanton said. “And, as importantly, we respect that they are able to demonstrate and promote those views in a respectful and civil manner. It’s a shared value at the University of Kentucky and one we celebrate.”

Gun owners are allowed to keep firearms locked in their cars while parking around public universities, the state Supreme Court ruled in 2012. But no weapons are allowed in classrooms, residence halls or laboratories.

Twenty-year-old Chisum Kirby, one of the group’s members, suggested students are sitting ducks if a deranged lunatic were to attack the campus.

“What is the response time for the police? Three minutes? It takes three seconds to get stabbed,” Kirby said.

For more information on University of Kentucky Students for Concealed Carry, check out the group’s Facebook page.