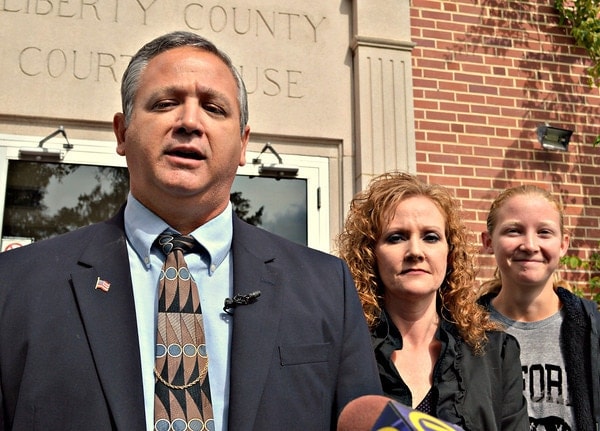 A Florida sheriff is now back at work after a jury on Thursday acquitted him on charges relating to misconduct and falsifying public records when he released a man who was carrying a concealed firearm without a permit.

Liberty County Sheriff Nicholas Finch denied any wrongdoing and told the six-member jury that he let 58-year-old Floyd Parrish go because he was just exercising his Constitutional right to keep and bear arms.

“After I testified, I felt really good about it because the jury was very attentive,” Finch told the Florida Current on the courthouse steps. “That jury knows that I was telling them the truth.”

Back in March, Floyd Parrish was pulled over by Sgt. James Hoagland, a former Liberty County police officer. Upon speaking to Parrish, Hoagland noticed that he had a holstered revolver on the front seat of his car and a .25-caliber semiautomatic pistol in his pocket.

Parrish, who did not have a valid Florida concealed carry permit, was charged with carrying a concealed deadly weapon. Hoagland took Parrish to the county jail and documented the arrest.

Later that day, Finch took the arrest file from the booking officer and told her that no charges should be filed against Parrish. He then released Parrish from jail, along with his confiscated firearms. Someone, it’s not clear who, applied White-Out on two lines of a log sheet and a jail report, where Parish’s name was.

Prosecutors claimed that it was Finch who altered the documents, which is tantamount to “official misconduct,” a third degree felony punishable by up to five years in prison.

Lead prosecutor Jack Campbell echoed those thoughts, contending that Finch was “using the Constitution to cover up his criminality,” and that the problem wasn’t with Finch’s decision to release Parrish for carrying a firearm but with his subsequent attempt to cover it up, allegedly.

Meanwhile, defense attorney Jimmy Judkins focused on the gun culture and the social customs that characterize the rural neighborhood.

“There ain’t many of y’all, but you have your own common code or beliefs,” Judkins told the jury. “It’s a way of life over here for people to own guns … There’s a distinct possibility that, every now and then, one of y’all is going to make a mistake and he doesn’t want to create a convicted felon out of an incident that could be misunderstood.”

Judkins said that no one knows who “whited out” Parrish’s name from the records and said that it didn’t much matter anyhow because computer records and property documents still existed to show that Parrish had been in custody for about three hours.

At the end of the day it appears that the jury bought into this “no harm, no foul” argument. Parrish was an otherwise law-abiding citizen and charging him with a gun crime did not seem reasonable.

“Sheriff Nick Finch will be reinstated immediately,” Scott said shortly after the verdict was given. “I would like to thank the members of the jury in Liberty County for their service in this trial. I would also like to thank interim Sheriff Buddy Money for his service to the state of Florida.”

As for Parrish, he struck a deal with prosecutors to avoid any gun-related charges. He had to pay a $200 fine and complete 50 hours of community service.