Hornady has just released a list of upcoming new product for their 2014 catalog and not surprisingly, they’re working on some interesting stuff. Hornady has a terrific reputation for making a wide spread of ammo, components and accessories for a very wide range of shooters.

First up is their new Custom Lite rifle ammo. This is a new line of cartridges in popular bolt-action and lever-action rifle calibers like .30-30 Winchester, .308 Winchester and .30-06 Springfield that is down-loaded for less recoil. This is good for shooters looking to spend more time at the range, not to mention for people looking to introduce new people to the shooting sports.

The Custom Lite series uses expanding ammo and is also appealing for hunters who don’t need or can’t use full-power ammo, particularly at shorter ranges. Custom light ammo has 25 to 30 percent less energy at the muzzle than standard cartridges.

In addition to rifle cartridges, Hornady is adding two Custom Lite shotgun loads, both slugs, one in 20 gauge and the other in, naturally, 12 gauge. These are copper-jacketed polymer-tipped hollowpoint slugs that offer less recoil for faster follow-up shots and will without a doubt be popular for self-defense.

Those aren’t the only new shotgun loads for next year. Hornady is adding a new American Whitetail slug for 12-gauge shotguns and a Heavy Magnum Turkey load for 20-gauge shotguns.

The new 20-gauge Heavy Magnum Turkey load is a scaled-down version of their popular 12-gauge load. While the load itself is fairly standard, with number 4, 5 or 6 nickel-plated lead shot, the 3-inch shells use Hornady’s special Versatite wad cup keeps the shot together out to 50 yards, much further than the 25 to 30 yard distances traditionally maintained by turkey hunters.

And as expected, they are also expanding on their Critical Duty line of self-defense cartridges, now including a .357 SIG cartridge. The niche bottleneck cartridge has a loyal and devoted following in addition to being in the service of several notable law enforcement and security agencies. Both .357 SIG and Hornady’s Critical Duty line are considered particularly barrier-blind and the combination of the two is sure to succeed.

Hornady’s product page for the new .357 SIG load shows excellent expansion and almost artful penetration in ballistics media through several different materials from heavy clothing to sheet metal and glass. It is a fairly light load just the same and should be fairly easy to control. 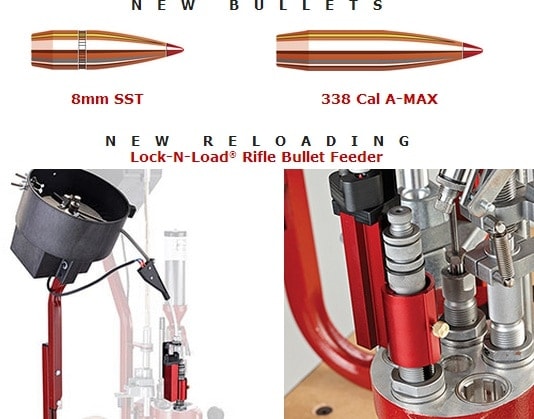 For reloaders Hornady is adding a new bullet feeder, the Lock-N-Load for rifle bullets. The device orients bullets in the right direction before dropping them into the reloading press, taking one of the more tedious elements out of the reloading process. The Lock-N-Load is designed to work with .22-caliber bullets as they are the most popular but it can be adapted for .30-caliber bullets as well.

Hornady is also expanding their component catalog to include an 8mm SST bullet and a .338-caliber A-Max bullet.

Finally, the company is rolling out a new series of handgun safes, including one particularly interesting electronic safe, the Rapid Safe.

The Rapid Safe is a powered safe that pops open and raises a handgun into position to make drawing it smooth and natural. The safe can be accessed in three different ways, by using a four-digit numpad, an RFID tag or a conventional lock.

By using an RFID tag the user only has to wave the key past the scanner and the safe will open without complication. It’s a sort of “smart” safe in that sense. Hornady has RFID tags embedded in bracelets, credit-card-sized keys that can be stored in a wallet and ordinary key fobs.

For more about Hornady’s new safe division, head over to their website.