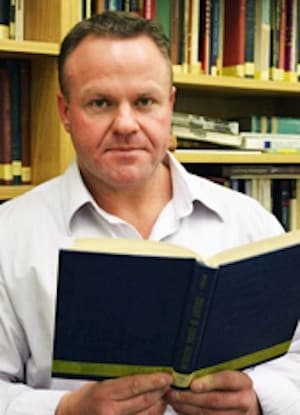 Dr. Kerry O’Brien with a book in his hands.

There’s is a positive correlation between symbolic racism amongst white Americans and gun ownership, according to the results of a new international study published in PLoS One, the peer-reviewed scientific journal.

The study, “Racism, Gun Ownership and Gun Control: Biased Attitudes in US Whites May Influence Policy Decisions,” conducted by researchers from Britain’s Manchester University and Australia’s Monash University, collected data from white U.S. voters and found that for each one point increase (on a scale from one to five) in symbolic racism there was a 50 percent increase in the odds that the respondent had a firearm in the home.

Additionally for each one point increase in symbolic racism there was a 28 percent increase in the odds that the respondent supported permissive concealed carry laws.

To gauge one’s level of “symbolic racism,” anti-black sentiment that is typified by the belief in certain stereotypes, e.g. “blacks are lazy,” researchers asked voters certain questions, for example, “How well does the word ‘violent’ describe most blacks?”

Respondents were then given five answers to choose from: “extremely well, very well, moderately well, slightly well or not at all well,” and then a point value was attributed to the person’s response.

Another question asked respondents to agree or disagree on a scale (1 pt = agree strongly to 5 = disagree strongly) with statements such as “Generations of slavery and discrimination have created conditions that make it difficult for blacks to work their way out of the lower class.”

It appears that the more symbolically racist one was, the more likely he/she was to own a firearm and support laws that strengthen one’s right to keep and bear arms outside the home.

“For example, U.S. whites oppose gun control to a far greater extent than do blacks, but whites are actually more likely to kill themselves with their guns, than be killed by someone else,” he continued. “Why would you keep them? So we decided to examine what social and psychological factors predict gun ownership and opposition to gun control.”

To put it crudely, it’s unsafe for whites to own firearms because it increases the risk of homicide and suicide. Yet, many whites purchase firearms, in part, because they are symbolically racist.

As O’Brien went on to say, “According to a Pew Research Center report the majority of white Americans support stricter gun control, but the results of our study suggest that those who oppose gun reform tend to have a stronger racial bias, tend to be politically and ideologically conservative and from southern states, and have higher anti-government sentiment.”

Though, according to the study, even when those other factors (political ideology, geographic location) were accounted for the correlation between symbolic racism and gun ownership maintained.

O’Brien noted that this is just the beginning and that more studies are need to examine the racial component of gun ownership amongst whites.

“The study is a first step, but there needs to be more investment in empirical research around how racial bias may influence people’s policy decisions, particularly those policies that impact on the health and wellbeing of U.S. citizens,” said O’Brien.

What are your thoughts about this study? Do you believe “symbolic racism” is driving white Americans to purchase firearms and support concealed carry?