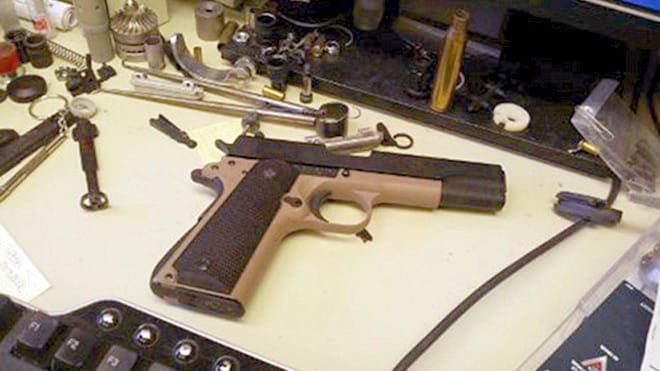 Browning is tooling up to add a new addition to their series of Model 1911A1-styled .22 Long Rifle pistols for 2014. The new handgun will use a polymer frame as opposed to the aluminum frames used with the other 1911-22s.

The new model sports a desert tan frame with black synthetic grips for a two-tone look that’s sure to win people over. While much of the frame — essentially all of the external part of it — is constructed from a polymer composite, the slide runs on a serialized metal internal sub-frame that also houses the fire control group. The pistol only uses polymer for the non-critical parts of the gun.

The polymer 1911-22 weighs less by an ounce and because it’s polymer we can expect it to be more resilient in some ways and be less prone to dings and scratches. While an ounce doesn’t sound like much, the aluminum-framed 1911-22 weighs 15 ounces making the polymer version weigh in at just 14 ounces (13 ounces for the compact model). 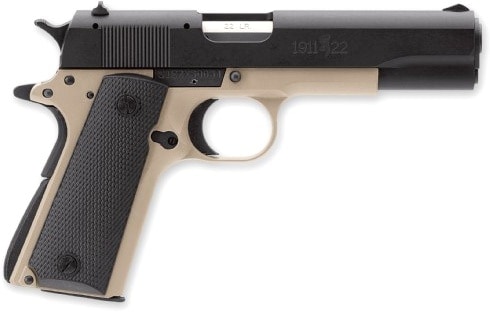 Equipped with a match-grade barrel, the 1911-22 is an interesting little plinker for shooters of all ages and skill levels.

The 1911-22 matches the 1911 in form and function. It does have GI-type sights and the slide serrations of a military-issue pistol. It also field strips like a 1911 (the barrel link design is different as the 1911-22 is a direct blowback pistol, but the disassembly process is identical) and can be thought of as a 1911 for beginners in that sense.

Mostly it’s just a very fun pistol to shoot. “I noted that shooting the little Browning 1911-22 is very much like shooting any full-sized 1911, which surprised me because I’ve shot plenty of 1911s with a .22 conversion kit, so I can tell the difference. In addition, this is a fine way to practice with a 1911 using inexpensive ammo, but, again, .22 is a lot different from a .45, you may have noticed,” said Jim Downey in our review of the handgun. 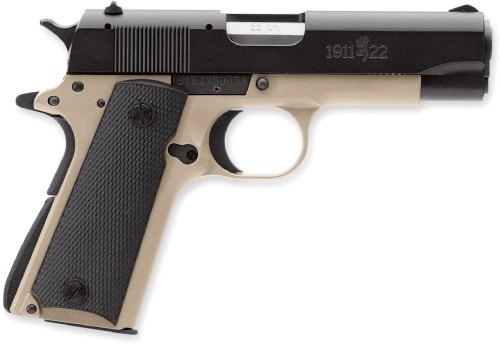 “That’s because even with a lighter recoil spring and matched barrel/light-weight slide assembly, the recoil is different due to the size and weight of the rest of the 1911 frame. The Browning, on the other hand, has the same balance and replicates the shooting experience of shooting a .45ACP. It’s a little thing, but one which each one of my friends who have tried it noticed right off the bat.”

Browning currently offers the 1911-22 in two models, one “full-size” and one “compact” model. They differ only in slide and barrel length, the larger model has a 4.25-inch barrel and the smaller one has a 3.6-inch barrel.

When the polymer version hits the market it too will be available in “full-size” and “compact” variants. The compact version weighs even less at a scant 13 ounces.

About the only major complaint towards the 1911-22 is that it is expensive compared to entry-level .22 pistols, generally around $550 to $600, which is a couple hundred more than what many other quality .22 Long Rifle handguns run. Hopefully the polymer models will cost a bit less.

That being said, the gun has developed a strong following with many people willing to pay a little more for this unique yet familiar design.