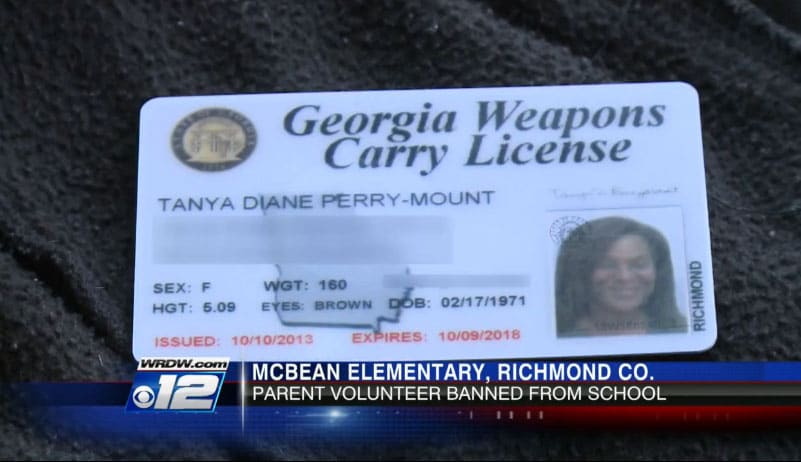 It’s this photo that Mount posted on Facebook which she believes is the cause of the entire ordeal. (Photo credit: WRDW)

A mother is furious after being banned from a Hepzibah, Georgia elementary school several weeks ago, which she says stemmed from her posting a picture on Facebook of her concealed weapons permit, WRDW reports.

“I feel like a criminal. I want to be heard. I want a public apology,” Tanya Mount said.

Mount said she was issued a criminal trespass warning last week by the Richmond County Board of Education police. But when she asked what she did wrong, she received an unexpected response.

“The principal is scared of you and she doesn’t want you on the grounds. I ask for what? And he asks were you in the Army and I said yes. He’s like do you have a concealed weapons permit? I said yes,” Mount described the conversation with the school board officer.

Mount, who is a parent volunteer at McBean Elementary School where her disabled daughter attends, said that she’s never had an issue with either the school or Principal Janina Dallas. But according to Mount, during a meeting several weeks ago, “She [Dallas] told me that instead of volunteering at the school and playing on the playground with my daughter I need to be at home doing grown up things.”

However, according to Mount, the real “grown up” issue is the fact that she has a concealed carry permit, a fact which was made public when she displayed her newly issued card in a picture posted on Facebook. Other than the comment about the permit and her serving in the Army, Mount said she was given no reason why she has been banned from the school.

The CBS News affiliate attempted to talk with Dallas to get her version of the story, but was told that the principal was unavailable for comment. Although one district official did confirm to reporters that Mount and Dallas had a meeting over Mount’s role as a parent volunteer, that official did not reveal any details of the meeting.

“I feel that this is some high school crap. He said she said,” Mount said. “She should have contacted me instead of taking the legal route which was uncalled for.”

Mount also confirmed that following the incident, the school district gave her permission to transfer her daughter to another school, which she plans to do.