Chiappa is working on a new polymer-framed version of the Rhino revolver for concealed-carry. The Poly-Lite maintains the same unique Rhino aesthetics and most importantly, six-o’clock barrel position.

The Rhino was introduced a few years ago and the gun community still isn’t sure what to make of it. An original design, the Rhino fires the bottom cylinder of the gun. This give the revolver a very low bore axis for less muzzle flip and better control.

The drawback is an awkward trigger pull that owes itself to the backwards internals and “mock” hammer (the hammer is internal, what looks like a hammer is a secondary cocking lever). While Chiappa has addressed the weight of the trigger since it was originally released and offers trigger upgrade kits that further lighten and smooth the Rhino’s trigger, the unconventional design of the revolver has some trade-offs.

That being said the recoil reduction is undeniable. Many have commented that shooting full-power .357 Magnum loads feel like shooting hot .38 Special, and shooting .38 Special +P feels like shooting wadcutters. 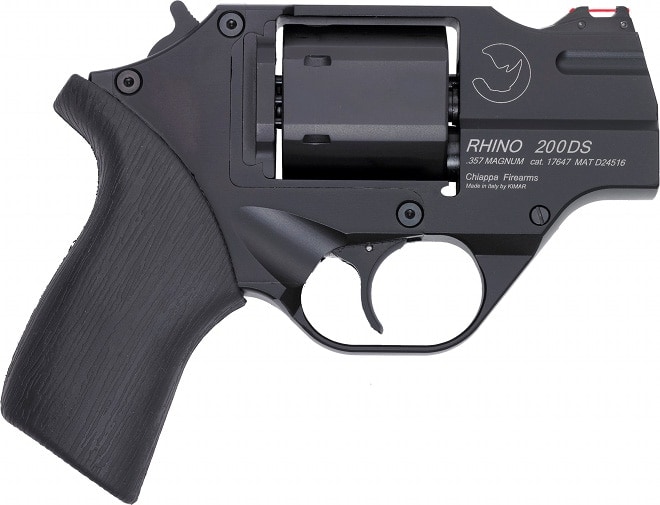 This is a standard alloy-framed two-inch Rhino. The Poly-Lite will look similar but use polymer for much of the frame.

The new Poly-Lite .38 should be one of the easiest snub-nosed revolvers to shoot ever made. Chambered for .38 Special the new model shares the overbuilt design of the metal-framed Rhinos but uses a good amount of polymer. And while the design is pretty beefy in profile, the truth is that the slab-sided gun, with its hex-shaped cylinder, is fairly low-profile in a holster.

While Rhinos have alloy frames and are already lightweight compared to similar-sized steel revolvers, the use of polymer for the Poly-Lite should make it weigh even less. The added flexibility of polymer for revolver frames also tends to reduce felt recoil even though it has less mass.

Complete with a fiber-optic front sight, as long as it’s not priced out of the market Chiappa will not have problems selling the new Poly-Lite. Current Rhinos retail in the $800 to $900 range; it’s possibly that the polymer version will be more affordable.

Of course it’s not surprising that the first Poly-Lite is a .38, one of the most popular concealed-carry revolver cartridges of all time.

But it will be interesting to see what future models of Poly-Lite Chiappa has up their sleeve for the future. The company is fairly dedicated to common service pistol calibers as well and previously announced models chambered for 9mm Parabellum and .40 S&W in addition to their .357/.38 models and 9x21mm models (for the European markets).

Along with this year’s NASGW sneek peek, Chiappa is re-re-re-announcing the Rhino in .40 S&W. The company originally announced versions chambered for .40 S&W in 2011. Their design uses moon clips for the rimless cartridges. We hope that Chiappa will follow through with this latest announcement. 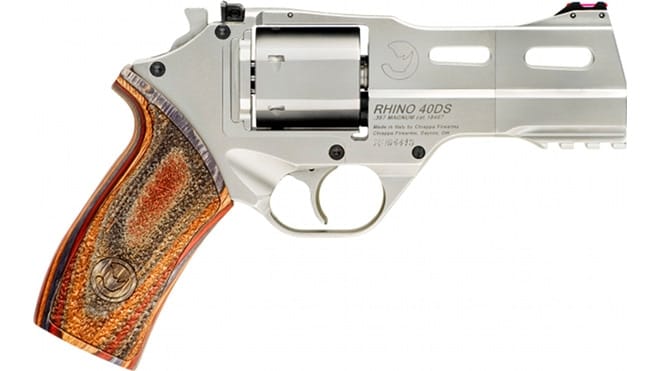 This is the “White Rhino.” Introduced in 2011, Chiappa currently offers it chambered for .357 Magnum, and has had plans for other cartridges including 9mm and .40 S&W.