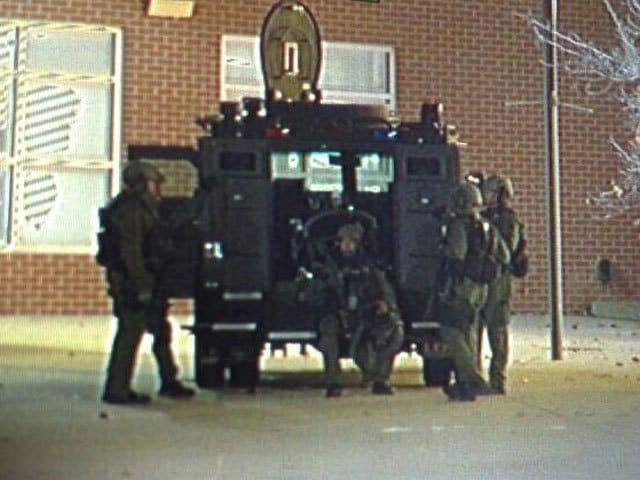 The responding team included a police helicopter, which spotlighted the school the in the early morning hours. (Photo credit: ABC Denver)

Two teen boys, who were thought to be armed with deadly weapons, are behind bars Tuesday after a stand off inside a Denver middle school that lasted several hours.

On Monday night around 10 o’clock, a custodian called the authorities after he saw the boys enter the school carrying bags and what appeared to be long guns, possibly assault rifles, a local ABC affiliate reports. One of the boys was also carrying some sort of large yellow tube, which authorities feared might have been a pipe bomb.

Apparently the two boys, who are both 15 years old, entered the school by breaking a window with a rock. Once the first teen was inside, he was seen motioning to the other teen to enter the building.

Other than the cleaning crew, who was able to get out of the school safely, the school was unoccupied at the time.

According to Denver Police spokesman Sgt. Steve Warneke, the police department also sent out a telephone notification to area residents warning them to stay indoors.

Authorities, which included the SWAT team and bomb squad, surrounded the school and eventually ended up in a long “cat and mouse game” with the boys. Just before 1 a.m., a police helicopter circled the school and shown a spotlight around the building’s exterior. Shortly after, a robot from the bomb squad also searched the school.

Officers even got on the school’s public announcement system and urged the boys to surrender, to no avail.

SWAT eventually searched the school room by room, found the boys and apprehended them about 3 a.m., but the teens no longer had the bags and guns in their possession. However, once those items were recovered, it was discovered that the rifles were only BB guns. Inside the bags, officers found items that the teens were attempting to steal, including a computer.

Several of the classrooms had also been ransacked and police believe the teen’s motive was burglary.

Much of the incident was captured on the school’s video surveillance cameras.

Neither of the boys were students at the school.

An investigation continues into whether or not the teens were also responsible for an earlier break-in at a nearby unoccupied elementary school.

Both schools were back to business as usual by Tuesday morning.