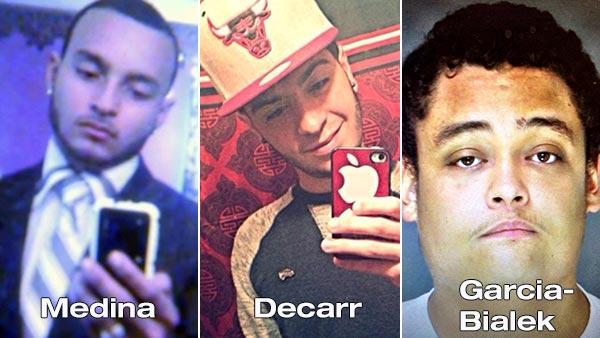 Two armed robbers were shot and killed after they held up a convenience store Monday afternoon  in Reading, Pennsylvania. Apparently the incident was witnessed by an armed citizen outside of the store, who wasn’t about to let the suspects get away.

It was around 2 o’clock when the two suspects, William Medina, 24, and Robert DeCarr, 18, walked into the corner store with their guns drawn, terrorizing the store owner and the customers inside, a local ABC affiliate reports. The men demanded cash, cigarettes and lottery tickets before making their way outside where a third accomplice, Alexander Garcia-Bialek, 21, was waiting with a getaway car.

But before they could make it to the car, they were approached by what Berks County District Attorney John T. Adams described as a “concerned citizen” who witnessed the entire robbery from outside of the store. The citizen, whose identity has been withheld, instructed the men to stop and that he was calling the police.

But instead of waiting idly to go to jail, the two suspects trained their guns on the citizen, who also happened to be armed. The citizen then shot both of the suspects in the chest.

One suspect fell onto the crosswalk in front of the store and the other ran about 20 feet before collapsing in the street. Both were pronounced dead at the scene when police arrived moments later.

Adams said that the citizen “acted justifiably under the law.”

“He used deadly force before deadly force may have been used on him,” he explained and added, “He was put in a situation that none of us want to be put in.”

The shooter was detained briefly for questioning, but has since been released. No charges are expected to be filed against the citizen, who police say have been cooperative and also holds a valid license to carry a firearm.

However, police were able to locate the third suspect, Garcia-Bialek, who is now facing multiple charges, including 2nd degree murder. Under Pennsylvania state law, he may be held liable for the deaths of Medina and DeCarr since Garcia-Bialek was an accomplice during the commission of a felony that resulted in the death of the two suspects.

Police are also looking into the possibility of the suspects also being involved in previous robberies as well.

One resident, who lives nearby, Carmella Chipperfield, said that robberies are common in the area and that it’s not the first time that the store owner has been targeted.

“That poor man,” Chipperfield told reporters, referring to the owner. “He’s very nice and he gets robbed a lot. He’s just trying to make a living and this happens.”

Chipperfield’s son, who was visiting her at the time of the robbery, ran outside after hearing what he thought were gunshots followed by sirens.

With friends and family of the deceased suspects angry over the demise of their loved ones, the armed citizen, who lives near the convenience store, now feels a sort of need to stay in hiding out of fear for his safety. In fact, the Reading Police Department has offered him protection and relocation services.