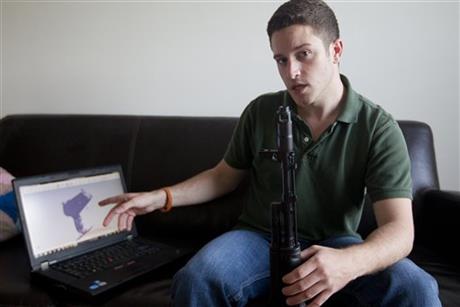 Cody Wilson and his computer.

Is 25-year-old Cody Wilson, the inventor of a 3-D printable gun called “The Liberator,” a terrorist?

Well, first it might be helpful to define a terrorist or more specifically an act of terrorism. According to Title 22 of the U.S. Code, Section 2656f(d), terrorism is “premeditated, politically motivated violence perpetrated against noncombatant targets by subnational groups or clandestine agents, usually intended to influence an audience.”

Meanwhile, the FBI defines terrorism as “the unlawful use of force or violence against persons or property to intimidate or coerce a government, the civilian population, or any segment thereof, in furtherance of political or social objectives.”

Essentially, it’s the use of force to precipitate a course of action that furthers a political or social goal.

By virtue of those definitions, Wilson is not a terrorist. He never directly used force or violence to agitate for a social or political cause.

However, he did, along with his partners at Defense Distributed, a nonprofit, pro-Second Amendment civil liberty group based in Texas, allow for hundreds of thousands of Internet users around the globe to download the blueprint for ‘The Liberator’ before the U.S. Dept. of Defense shut him down or threatened to sue him if he did not remove the files.

“I had to take them down from my site. They got me quickly, but not quickly enough,” Wilson told KATV, in discussing the incident.

Even though he took down the blueprints upon hearing from the DoD, Wilson may still face prison time, fines or both, as the U.S. Department of State told KATV.

“The U.S. government views the export of defense articles and defense services as an integral part of safeguarding U.S. national security and furthering U.S. foreign policy objectives,” the department stated. “The United States is cognizant of the potentially adverse consequences of indiscriminate arms transfers and, therefore, strictly regulates exports of defense items and technologies to protect its national interests and those interests in peace and security of the broader international community.”

Wilson uploaded the blueprints knowing that they may fall into hands of terrorists, despots and sociopaths, knowing that The Liberator might be used to kill or wound U.S. soldiers serving overseas.

“What we’ve done is explode the entire paradigm by saying look now it’s out there, anyone can have it. It isn’t given stewardship and by that, there’s no central point of failure or compromise or pollution. It’s sort of liberalized or liberated,” Wilson explained.

“We sought to kind of reproduce that, psychological, you could call it terror. By saying in a sense, we have a released a gun into the Internet,” Wilson continued. “This gun is now available to anyone in the world at anytime, whether they’re on our side or not.”

In Wilson’s mind, releasing The Liberator to the masses is protected under his Constitutional right of free speech. But even if a federal court or jury finds him guilty of violating laws regulating the transportation, import, export, etc. of firearms, he’s prepared to face the consequences.

“What we did as a speech act, as a template of thought and even the legal prescience that might come of it, they have so much more gravity than what might happen to me,” Wilson said.

That said, there is something to be said about national security, public safety and doing what’s in the best interest of one’s country. Some will argue that what Wilson did was feckless, that he didn’t have to share it with the entire world, that by doing so he needlessly put Americans at risk.

Though, one can counter that argument by saying that if it wasn’t Cody Wilson, it’d be somebody else, which is true. Technology doesn’t slow down for anyone and once the genie’s out of the bottle there’s no putting him back in.

In any event, what are your thoughts? Is Cody Wilson a patriot? Is he an enemy of the state? Is he both?