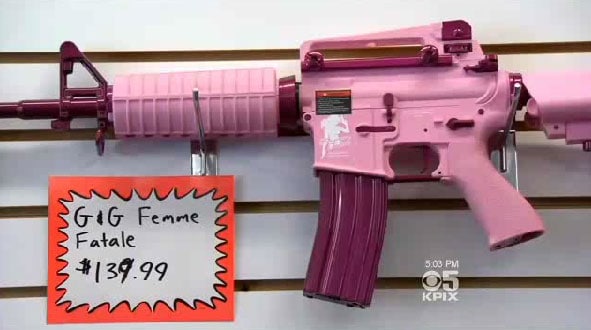 With brightly colored pink guns being all the rage among some women, it’s hard to say that toy guns donning the same bright colors would distinguish them as such.

A police shooting last month in Santa Rosa, California that resulted in the death of a 13-year-old boy, who was carrying what was later discovered to be a plastic replica of an AK-47, has once again stirred debate over toy guns and possible legislation to prevent future tragedies, the Chicago Tribune reports.

“There are so many kids running around with these things that it is almost inevitable there will be additional shootings in the future,” said Dan Reeves, chief of staff to state Sen. Kevin De León.

Since the teen’s death, De León’s office has spoken with leaders in Santa Rosa and surrounding areas concerning possible changes in statewide regulations regarding toy guns. His office is putting together a coalition, which will include police chiefs, to overcome expected industry and legislative resistance.

In 2011, Reeves lobbied for legislation requiring toy guns to be painted bright neon colors to distinctively separate them from the real thing, comparable to current legislation in New York City. The proposed bill was drafted following a similar incident, which left a 13-year-old Los Angeles boy a paraplegic and the city footing a bill for $24 million in damages.

The proposed bill never made it out of an Assembly committee, but Reeves has once again taken to changing regulations surrounding these toys.

However, Ryan Podesta, owner of Thirty-First Outfitters in Cotati where airsoft and BB guns are sold, believes that the proposed bill or any other legislation would have done little to protect kids from such tragedies.

“That’s not what people want,” Podesta explained. “You can change the legislation all you want, but if a kid buys a gun and it’s all pink or all clear, they’re just going to spray paint it.”

In fact, federal law already requires that airsoft and toy guns have a bright orange-colored tip to distinguish them as such. However, in many cases kids simply remove the orange tip or color over it in an effort to make them look more realistic.

The gun Lopez was carrying had the orange tip removed and the officer who shot the L.A. teen said he simply didn’t see the orange tip.

Additionally, it’s already illegal to carry a realistic-looking airsoft or BB gun in public in the state of California. And such guns can only be purchased by an adult over the age of 18.

Do you think the senator’s ideas would prevent future tragedies? What are your thoughts?