A burglar was caught (quite literally) in the chimney of a Naples, Florida residence when he tried to break into a home.

This man may very well be Santa’s arch-nemesis. Instead of spreading Christmas cheer and bringing presents to good little boys and girls, 25-year-old Richard Tyler Brandon got stuck in a chimney while trying to take things away from them, NBC 2 reported. 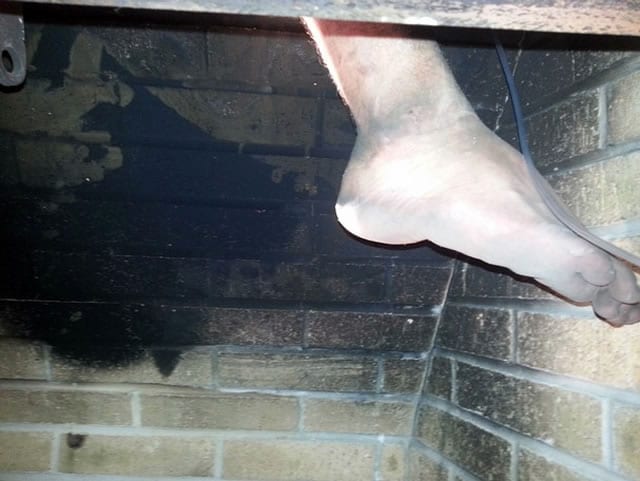 Brandon’s friend left him dangling in the chimney while he ran to deputies for help.

In the early morning hours, Brandon clambered onto Mike Whitley’s roof and shimmied down his chimney. He did a surprisingly good job for such a poor idea, until he got stuck that is. Brandon brought along another Grinch to help him carry the loot, but instead of lending a hand, 26-year-old Derek Alan Grenfell left his friend in the chimney as he ran to tell deputies at a nearby 7-Eleven of the precarious predicament.

Police and firefighters arrived at the residence around 2am and discovered a shoeless foot dangling in the fireplace. Firefighters managed to attach a harness to Brandon and hoist the bungled burglar to safety, but not before snapping a few embarrassing photos.

Brandon didn’t suffer any serious injuries from being trapped between a rock and a fireplace, but the chimney was unfortunately damaged during the ordeal. But the homeowner laughed it off and kept his spirits high.

“I think this Santa was trying to remove things rather than brining presents in,” Whitely chuckled.

Firefighters managed to hoist Brandon up without any serious injuries, although the chimney was damaged in the process.

The crooks lived less than a mile from their mark and neighbors were surprised to hear of Brandon’s nefarious crime.

“Nice people. Decent people. I spoke to them Saturday,” a neighbor said of the Brandon family. “It’s shocking. A big surprise.”

Both suspects were booked into the Collier County Jail, each on two counts of burglary. They were charged for two counts because not only did Grenfell run to police to tell them his friend was stuck in a chimney, but he also blabbed that the two had completed another burglary just before entering Whitley’s residence.

Not a very good henchman. 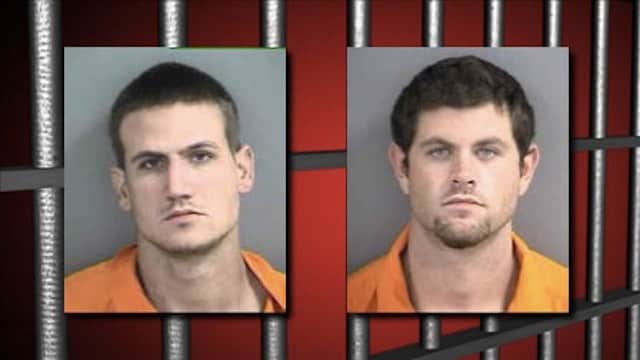 Brandon, left, and Grenfell were both arrested on two counts of burglary after Grenfell confessed to police they had committed another burglary just before Brandon got stuck in the chimney.