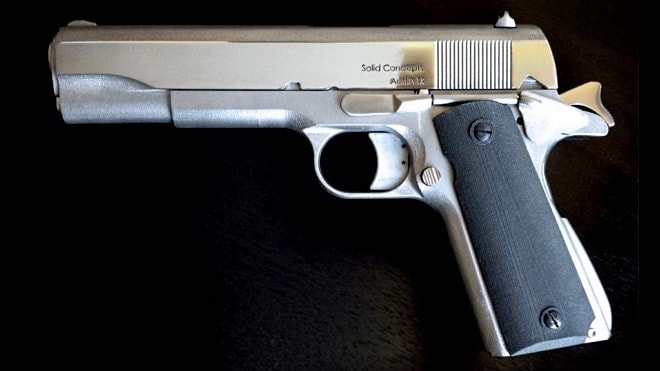 Solid Concepts is taking 3D printing over a threshold with their just-announced 3D printed stainless steel handgun. A 1911, the Solid Concepts pistol is chambered for full-power centerfire .45 ACP cartridges.

The company is out to prove a point, that 3D printing has reached a level of maturity and precision that they can make a traditional firearm with the leading-edge technologies. Naturally, they are working with industrial-scale 3D printers, not the types of devices hobbyists have at home.

“Solid Concepts is a world leader of 3D printing services, and our ability to 3D print the world’s first metal gun solidifies our standing,” explained Alyssa Parkinson in the company announcement. “The gun is a classic 1911, a model that is at once timeless and public domain. It functions beautifully: Our resident gun expert has fired 50 successful rounds and hit a few bull’s eyes at over 30 yards. The gun is composed of 30-plus 3D printed components with 17-4 stainless steel and Inconel 625 materials. We completed it with a selective laser sintered (SLS) 3D-printed hand grip, because we’re kind of crazy about 3D printing.”

Apparently the only parts of the gun that were not 3D-printed were the magazine and the springs. All of the other handgun’s components — including the rifled barrel — were 3D-printed.

“The whole concept of using a laser sintering process to 3D print a metal gun revolves around proving the reliability, accuracy and usability of 3D Metal Printing as functional prototypes and end use products,” said Kent Firestone, their V.P. of additive manufacturing. “It’s a common misconception that laser sintering isn’t accurate or strong enough, and we’re working to change people’s perspective.”

“Solid Concepts has been a service provider since 1911, doing mostly aerospace work, medical work and production runs,” Parkinson told Recoil. “Part of us building this gun was to prove that it could be done — that it’s ready to handle these kinds of pressures, the heat, etc.”

The gun was printed, assembled and test-fired 50 times, which indeed proves that current, albeit leading, 3D printing techniques can be put to use making working firearms.

To be true it will only be a matter of time before this technology moves towards the small scale. It stands to reason that in the future the general public will have access to the same level of 3D-printing tools as Solid Concepts uses — just as the types of polymer-bending 3D printers available today are on-par with those used by the commercial sector a decade or so ago.

For now though, there are only a handful of companies with the capability to 3D print 1911s. That being said Solid Concepts may capitalize on the fact that they’re in rare company by producing a limited run of 3D-printed 1911s.

They will no doubt carry a steep price tag as 3D printing is a particularly expensive means of manufacturing. But there is likewise no doubt that there exists a long list of collectors who would love to own of the first fully 3D-printed firearms.

“Our expertise is manufacture,” Parkinson said. “We’d need to look at some things, talk to someone who knows more about pricing one of a kind guns before setting a price.”

A real torture test would be needed to prove that the Solid Concepts’ 1911 is truly as dependable, reliable and strong as a conventionally-produced 1911, although that’s not really the point of this demonstration. Solid Concepts has proven that 3D printing can make a product that’s as functional as traditional manufacturing — even when it comes to metal. Any other implications are for another day. “I mentioned earlier this isn’t about desktop printers, and it’s not,” Parkinson said. “The industrial printer we used costs more than my college tuition … and the engineers who run our machines are top of the line; they are experts who know what they’re doing and understand 3D printing better than anyone in this business. Thanks to them, Solid Concepts is debunking the idea that 3D printing isn’t a viable solution or isn’t ready for mainstream manufacturing. We have the right materials and the right engineers who know how to best program and maintain these machines, to make 3D Printing accurate, powerful and here to stay.”

For more information check out the Solid Concepts website. They also have a blog and Facebook page.