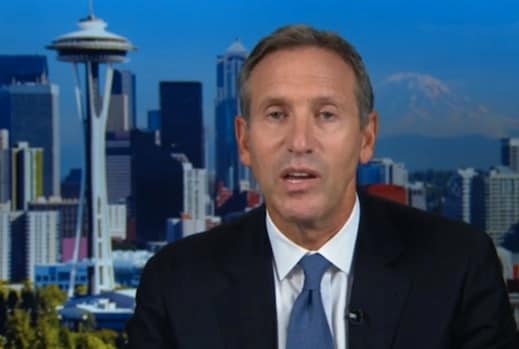 To the chagrin of many gun owners, Starbucks CEO Howard Schultz announced back in September the company’s desire to make their coffee shops, for the most part, gun-free.

Schultz said, in an interview with CNN’s Poppy Harlow, that “…[Starbucks is] not pro or anti-gun. However, we do believe that guns should not be part of the Starbucks experience. And as a result of making that final decision, we are respectfully requesting that those customers who are carrying a gun just honor that request and not bring a gun into Starbucks.”

Though, Schultz acknowledged that it was a request and not a ban on firearms. Gun owners who carry into store locations would not be asked to leave and they would still be served.

In any event, this statement left many gun owners with a bad taste in their mouth. It appeared to some that Schultz was insinuating that gun owners were second-class citizens.

Now, though, gun owners might have a reason to once again support Starbucks. That is, Schultz announced plans to hire 10,000 veterans and active duty spouses over the next five years.

“The value we are creating for shareholders is tied to the values that guide us as an organization. As I look at the opportunity ahead of us, we’re going to need to hire men and women with like-minded values and the right job skills in order to continue our current levels of growth,” said Schultz.

“The more than one million transitioning U.S. veterans and almost one and half million military spouses – with their diverse background and experience – share our mission-driven sensibility and work ethic and can build long-term careers at Starbucks as they return home,” he continued.

With over 200,000 employees, Starbucks is the largest coffee chain in the world. Jobs available for veterans and their spouses would include everything from a barista to a store manager to filling specialized roles in supply chain, manufacturing and logistics.

“One of the most significant challenges our veterans face is a corporation’s inability to understand and translate the skills of military service into a meaningful private sector role,” said former Defense Secretary Robert M. Gates.

“Veterans and military spouses represent one of the most underutilized talent pools in our country and, without the proper career path, will continue to go untapped,” Gates added. “Companies like Starbucks recognize this opportunity and are moving swiftly and aggressively to match the jobs they will create in the future with the talent returning to America over the next several years.”

In addition to hiring veterans and their spouses, the java giant is opening up five community stores in U.S. joint base locations to help fund local nonprofit programs that support veterans re-entering the workforce. In other words, it’s more than just jobs at Starbucks Schultz is offering to servicemen and servicewomen, it’s financial support to find careers elsewhere.

Schultz may have reservations about embracing the gun community, but it’s nice to know he’s making an effort to take care of veterans and their families (the majority of whom are also gun owners and sportsmen).  And who knows, maybe with enough veterans on the job the corporate culture of Starbucks will shift to becoming more gun friendly and Schultz will start to recognize the value of having highly trained and responsible gun owners working for the company.