The dramatic body-camera video from the officer involved in a shooting that saved a woman from being stabbed to death from her boyfriend in September was released by police Nov. 6.

Police kicked in the door to 32-year-old Jermaine Green’s house and approached, guns drawn, as Green held a knife to his girlfriend’s throat and dragged her off to a back bedroom.

The scene grew increasingly terrifying as Daytona Police Officer Richard Maher and Officer Kevin Connelly followed Green into the bedroom and found him with the knife raised in the air as he prepared to plunge it into his girlfriend’s stomach. 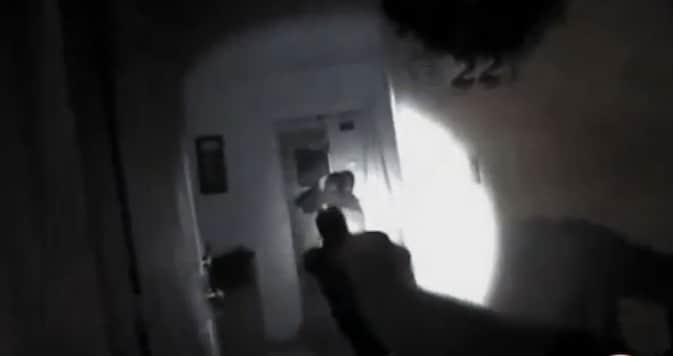 Officers kicked down the door to find a suspect holding a knife to a woman’s throat.

With complete command presence and total control of the situation, Maher quickly advanced on the suspect and unleashed a volley of fire, striking Green at least four times in the leg and once in the stomach, and prevented the crazed man from killing his girlfriend, Katrina Johnson.

Daytona Beach Police Chief Mike Chitwood expressed how proud he was of the performance of his officers.

Chitwood said the Florida Department of Law Enforcement has already thoroughly examined the video, and when they played it back frame by frame, what they saw was astonishing.

“They broke it down frame by frame, and there’s a point in there where you can actually see the knife start to bend because he’s pushing with that much force into her chest,” he commented. 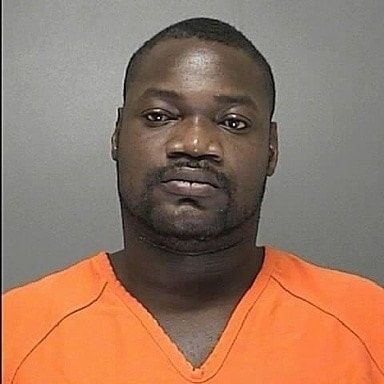 Jermaine Green was a former football star and according to his grandmother, he suffers mental illness.

The police chief defended the actions of his officers, commending them on making a tough, split-second choice between life and death.

“Do you stand there and let him stab her through the heart, or do you take action?” Chitwood said of his officers. “And the officers had to take action, and I’m proud of them, and they did the right thing.”

Green, a former Spruce Creek High School football star who was once signed by the New York Giants, was rushed to Halifax hospital in critical condition. According to Green’s aunt, he had mental health issues and a temper.