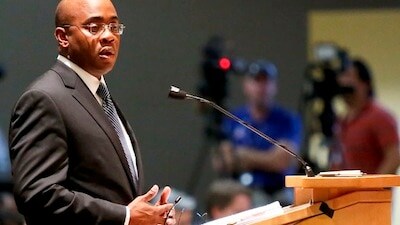 A bill to repeal Florida’s controversial ‘Stand Your Ground’ law was shot down on Thursday by a panel of state lawmakers.

Before a packed house and after hours of impassioned testimony, the House Criminal Justice Subcommittee rejected the proposal to repeal the state’s self-defense law, which removes ones duty to retreat and allows one to use force, including deadly force, if he/she reasonably believes his/her life is in danger, by a vote of 11-2.

During the hearing, State Rep. Alan Williams (D-Tallahassee), the sponsor of the measure, argued that the bill was creating unrest in communities across the state.

“Let’s repair the divide, whether it’s seen or unseen, that this law appears to have given our communities around the state,” Williams said.

“We have had a number of cases that have shown us over and over that the law as adopted in 2005 isn’t working,” Williams added, citing the acquittal of neighborhood watch volunteer George Zimmerman in the shooting death of 17-year-old Trayvon Martin.

Attorneys representing Zimmerman never explicitly used a SYG defense in court, however, a copy of the self-defense law was given to the jury during its deliberation. It’s unclear as to what impact, if any, SYG had on the jury’s ‘not guilty’ verdict.

Meanwhile, defenders of the law like Rep. Marti Coley (R-Marianna) pointed to Florida’s crime statistics to make a persuasive argument against repealing SYG.

“Today, our state is a safer place and has the lowest crime rate in 42 years,” Coley said. “Florida’s ‘stand your ground’ law is solid. It’s good and should not be changed.”

Coley’s testimony was backed by the Florida Sheriffs Association, which conducted it’s own review of the law in August, opting to unanimously support the law “as it is currently written.”

Okaloosa County Sheriff Larry Ashley, who attended the hearing, told the panel, “Florida sheriffs unequivocally support the right to ‘stand your ground,'” adding that people don’t have time to ponder why an intruder is in their home.

While the panel voted decisively against repealing SYG, it approved another measure that would not subject individuals who fire warning shots to a mandatory-minimum sentencing law known as 10-20-Life (10 for pulling a gun, 20 for shooting it, and life for shooting someone).

The impetus for the measure was a case involving a 31-year-old Jacksonville woman, Marissa Alexander, who was sentenced to 20 years in prison for allegedly firing a warning shot at her husband.

Attorneys for Alexander invoked SYG during the preliminary proceedings but failed to convince a judge that it applied in her case. After refusing a plea deal by prosecutors, Alexander opted to go to trial. A jury took 12 minutes to render a guilty verdict. She was given 20 years.

The panel passed the measure by a vote of 12-1. It will now head to the Florida Legislature to be reviewed by both chambers in March during the 2014 legislative session.

NRA lobbyist Marion Hammer voiced her support of the law.

“10-20-Life was never intended to be used against citizens who, in an act of self-defense, threatened the use of force to stop an attack,” Hammer told the Tampa Bay Times.