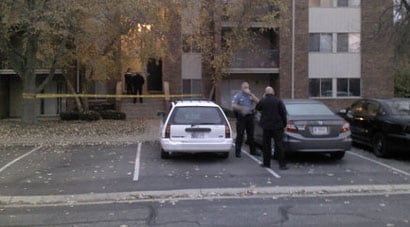 A home invasion in Fort Wayne, Indiana early Monday morning turned into a gunfight when one of the victims, armed with a gun of his own, opened fire on one of the suspects.

It was just after 6 o’clock a.m. when two men broke into an apartment which was occupied by a man, a woman and a child, the News-Sentinel reported. Although police have not released many details about the incident, they did confirm that the male resident shot and killed one of the suspects, which sent the second suspect fleeing. However, at some point the resident was also shot, but authorities said they did not know which of the suspects shot the resident.

After police arrived, the resident, whose name has not been released, was transported to a local hospital with severe injuries resulting from the gunshot wounds. According to the police, as of Monday afternoon the man still remained in serious condition. His prognosis is unknown.

The woman and the child were not injured during the home invasion.

The suspect which had been shot and was later identified as 36-year-old Sylvanus Williams of Indianapolis, was pronounced dead on the scene once officers arrived.

According to a local newspaper, Williams had a prior felony criminal record dating back nearly 20 years and included drug and gun charges.

The county coroner ruled Williams’ death a homicide, which simply means that he died at the hands of another person and in no way indicates guilt of any crime.

Authorities have not stated whether the resident will face any charges once he’s released from the hospital, but it is unlikely since the initial investigation indicates he acted in self-defense against the two intruders, at least one of which was armed.

Police are still searching for the second suspect, but have almost no information on the man other than his sex and the fact that he got away.