EDITORIAL: Did Dick Metcalf deserve to be fired over Guns & Ammo column on 2A limitations? (VIDEO)

This week Guns & Ammo fired their longtime editor Dick Metcalf because he wrote a “controversial” column arguing that the Second Amendment to the U.S. Constitution is not absolute, that there are some reasonable regulations that the federal government and states can impose to limit one’s right to keep and bear arms. 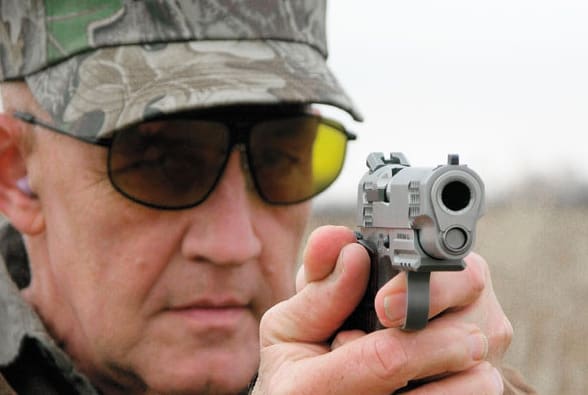 “Way too many gun owners still seem to believe that any regulation of the right to keep and bear arms is an infringement,” Metcalf wrote in the editorial titled “Let’s Talk Limits.” “The fact is, all constitutional rights are regulated, always have been, and need to be.”

He then went on to point out a specific regulation that he finds tenable, the number of training hours Illinois requires for one to obtain a concealed carry permit.

“I don’t think requiring 16 hours of training to qualify for a concealed carry permit is infringement in and of itself,” Metcalf concluded. “But that’s just me.”

While one may disagree with Metcalf about his stance on the number of required training hours one must complete to obtain a concealed carry permit (16 is extreme, in my opinion) or the notion that one even needs to complete any training (‘Shall issue’ carry v. Constitutional carry), one cannot make a convincing argument that he’s wrong about placing limits on the Second Amendment. Truth be told, there are regulations that are not considered to be infringements.

Don’t take my word for it, take Supreme Court Justice Antonin Scalia’s word for it.

“Yes, there are some limitations that can be imposed,” Scalia, a constitutional originalist, told Chris Wallace of Fox News Sunday back in July 2012. “What they are will depend on what the society understood was reasonable limitation” when the Constitution was written.

One such 18th century limitation was carrying menacing hand-held weapons, such as a “head ax,” with the intent to scare or intimidate people, Scalia explained.

Wallace pressed Scalia about “technological limitations,” such as banning large capacity magazines or high-powered semi-automatic rifles that can fire a hundred rounds in a minute.

“The [2nd Amendment] does not apply to arms that cannot be hand-carried.” Scalia said. “It’s to keep and bear. So, it doesn’t apply to cannons. But I suppose there are handheld rocket launchers that can bring down airplanes that will have to be — it will have to be decided.”

In the landmark Heller decision that overturned Washington, D.C.’s ban on handguns, the high court made it clear though that the Constitution protects firearms and accessories “typically possessed by law-abiding citizens for lawful purpose” or those “in common use.” In other words, gun and magazine bans are unconstitutional.

Nevertheless, some state and federal-imposed limitations are constitutional. ‘Shall-issue’ concealed carry requirements, such as mandatory safety training or criminal background checks, are not considered to be unconstitutional or unreasonable in the eyes of most courts. Sorry, that’s just the way it is or, to circle back to what Scalia said, what we as a represented democracy, have decided. And that’s pretty much all Metcalf was saying or attempting to say.

Why people are so butt-hurt by Metcalf’s editorial is puzzling to me. The gun owners I pal around with are the smartest, most thoughtful and responsible people I know. To have a significant faction of the community wig out over a column that makes a rather obvious and well-known point is shocking to me. Where are their heads at?

Plus, as gun owners, I thought we valued intelligent discourse and fact-based dialogue. I thought we believed in the Hume tradition, “Truth springs from argument amongst friends.” I thought we were open to hearing from moderate voices because, after all, there are 100 million gun owners in this country, not all of who are NRA disciples (for the record, I heart the NRA but I’m also not so presumptuous as to assume that every other gun owner does).  I don’t know. I guess I greatly overestimated our capacity to tolerate differing perspectives within our own community.

Although I’ve never met him, Metcalf seems like a stand-up guy who’s probably done more for the Second Amendment than most of his critics (he’s worked with lawmakers to draft the Firearm Owners Protection Act and testified before Congress to help further gun rights). But now he’s out-of-work because he doesn’t believe the Second Amendment is absolute nor does he find 16 hours of training to be unreasonable.

I think that’s crazy that he lost his job for having an opinion that, at its heart, is not all that controversial. Guns & Ammo should stand by Metcalf. But instead, they parted ways with Metcalf and released the following apology: 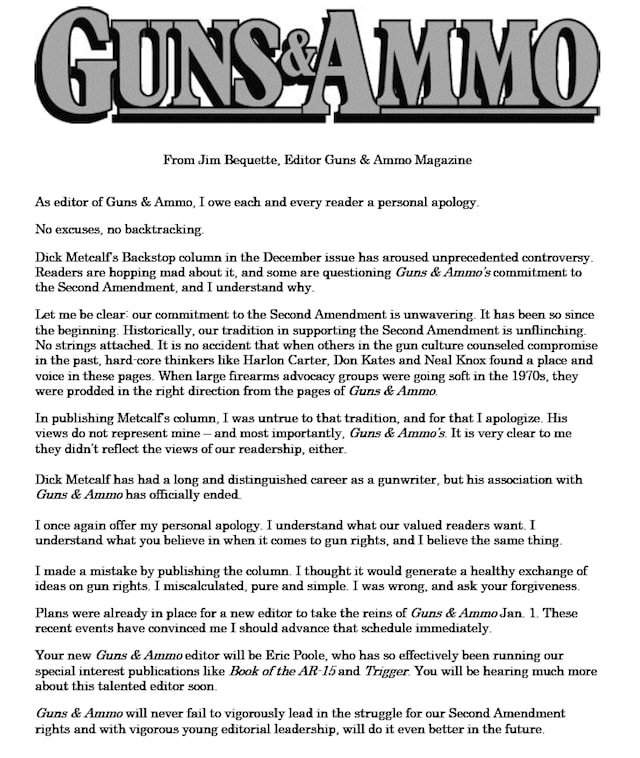 Whether you agree with his position or not, do you think Metcalf deserved to be fired because of his column? What are your thoughts?