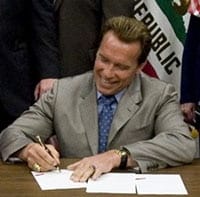 The Governator, Gov. Arnold Schwarzenegger, armed with a pen signs a bill into law some years ago.

On Wednesday, a state appellate court upheld a permanent block on a California law requiring handgun ammunition buyers to provide photo identification, a thumbprint and other information when purchasing ammo from a gun shop or store, the Fresno Bee reports.

The California Court of Appeals for the 5th District ruled that the law, which was signed by Gov. Arnold Schwarzenegger in 2009, was unconstitutional vague because ammunition is often interchangeable between long guns and handguns.

“The level of certainty necessary to provide fair notice of the proscribed conduct and adequate standards for compliance with the law is missing,” said Justice Gene Gomes in the majority opinion. “Therefore, the statutory scheme is unconstitutional.”

More specifically, Gomes said that the law has failed to provide “a common understanding or objective meaning of the term ‘handgun ammunition.'”

Naturally, California gun owners and gun rights advocates were thrilled with the ruling.

“We’re very happy with the ruling,” Sam Paredes, the executive director of Gun Owners of California, told the Fresno Bee. “There’s a lot of good language in it.”

Paredes explained that “[t]he law was definitely illegal and unconstitutional,” noting that it “wouldn’t even be a speed bump for criminals. It would give them an excuse for a road trip to Nevada,” where they purchase ammo without an issue. Plus, he said, “the state will lose all of the sales tax from ammunition sales here.”

C.D. Michel, a West Coast attorney who represents the National Rifle Association, agreed, telling the San Francisco Chronicle that “it was impossible for vendors or law enforcement or ammunition purchasers to learn what was or wasn’t regulated.”

“It was a recipe for accidental criminals being created by a law that nobody could understand,” he added.

Indeed. But in his Dissenting Opinion, Justice Dennis Cornell, argued that it wouldn’t create problems and that it would only be a “minor inconvenience” to ammo buyers that would not infringe upon their right to keep and bear arms.

To back his opinion, Cornell cited instances where gun sellers labeled their store shelves as “handgun ammunition” and that there is a book called “Current Handgun Cartridges of the World.”

Furthermore, he said federal laws regulating handguns are occasionally generally worded, such as the federal law prohibiting mail-order sales of firearms “capable of being concealed on the person.”

Likewise, the legal director of the Law Center to Prevent Gun Violence, Juliet Leftwich believed that the law passed constitutional muster. She also said that “the state of California currently has no idea who is selling or buying ammunition, making it very easy for convicted felons and other prohibited persons to buy ammunition.”

Moving ahead, California Attorney General Kamala Harris will have to make the call as to whether it’s worth appealing the case to the state Supreme Court.

“Our office is reviewing the decision,” Nick Pacilio, a spokesman for Harris, told the Fresno Bee.

Though, even if Harris opts not to file an appeal to the state Supreme Court, the issue is not dead. The author of the bill, Sen. Kevin de Leon (D-Los Angeles) has introduced another bill that would mandate those requirements for all ammunition purchases, not just “handgun ammunition.”

The state Legislature will vote on the Leon’s new bill in 2014.

(An older video of the law, when it was first blocked by Fresno County Superior Court Judge Jeff Hamilton).