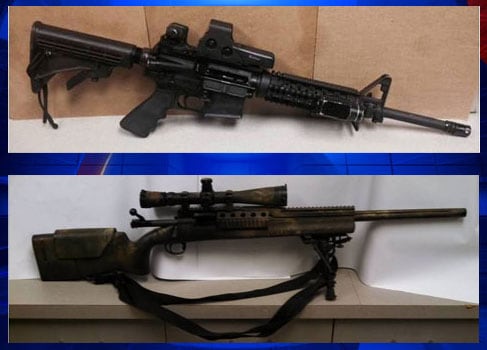 The rifles recovered after being stolen from an FBI agent’s vehicle. (Photo credit: FOX)

A 16-year-old boy was arrested Friday for stealing two high-powered rifles from a SWAT vehicle earlier this week in Andover, Massachusetts.

One of the teen’s family members returned the guns to nearby Lawrence officials Friday morning around 2:30. The FBI was offering a $20,000 reward for the recovery of the weapons and officials confirmed that the reward would be issued, a My Fox Boston reports.

The boy was arrested some nine hours later, around 11 o’clock, according to CBS Boston. The teen faces seven charges in all, including larceny and breaking and entering. He was due to be arraigned in juvenile court.

According to the FBI, the teen stole a Colt M16-A1 rifle and a HS Precision Pro-Series 2000 Sniper Rifle sometime either late Wednesday evening or early Thursday morning, which prompted a public plea from the agency in an effort to recover the lost weapons.

The name of the agent who was responsible for the guns has not been released, but he was scheduled to take part in a special operation on Thursday. The rifles were being stored in a Suburban that was parked at the agent’s house in Andover. The area had experienced a recent rash of vehicle break-ins, however, it’s unknown if the firearms were properly secured in the vehicle.

According to Massachusetts state law, firearms are not allowed to be stored in a vehicle unless there are unloaded and stored in a locked trunk or case. Failure to follow the law carries a fine of $500 to $5,000. However, law enforcement is exempt.

“That SWAT vehicle was properly deployed in a pre-deployment position at an agent’s residence,” special agent in charge Jeffrey Sallet said. “There are situations where it is proper for FBI special operations agents to secure weapons in a vehicle,” he explained.

According to Andover Police Commander Charles Heseltine, investigators discovered fingerprints on the SWAT vehicle as well as another undisclosed vehicle that had been broken into. After running the fingerprint samples through the national database, authorities were led to the teen boy.

Authorities did not reveal if the teen had a prior criminal record or if he was thought to be responsible for any of the other area vehicle break-ins.

As is standard protocol, an internal investigation will be conducted concerning the incident.