This past May, I was in Houston for the NRA convention.  The show floor was full of whiz-bang gizmos and amazing guns — more than any one person could have seen in a weekend.  As one who reviews guns and gear, I had to pass by booths filled with new guns (that I had to trust I would see eventually) in order to get to all of the small booths that were hiding in the shadows of the monolithic corporations we all love so much.

It was in one of these small booths that I found the Bullseye Camera System.  I knew at once I was seeing something that would change the future of sport shooting.  A simple idea gave rise to one of the most ingenious products I saw at the show and easily the coolest thing I’ve gotten to test since.

At its core, the Bullseye Camera System is a remote camera that is trained on your target.  The camera relays its images via a wireless signal to software on your computer.  The software allows for you to easily watch a before/after image of each shot.  The hole that appears (which is all that is different in the images) flashes.  Even on a target riddled with holes, the new addition will flash.

We’ve seen a system similar to this before at the Citadel Marksmanship Center, but it was for an indoor air rifle range — the sort for Olympic and collegiate style shooting. 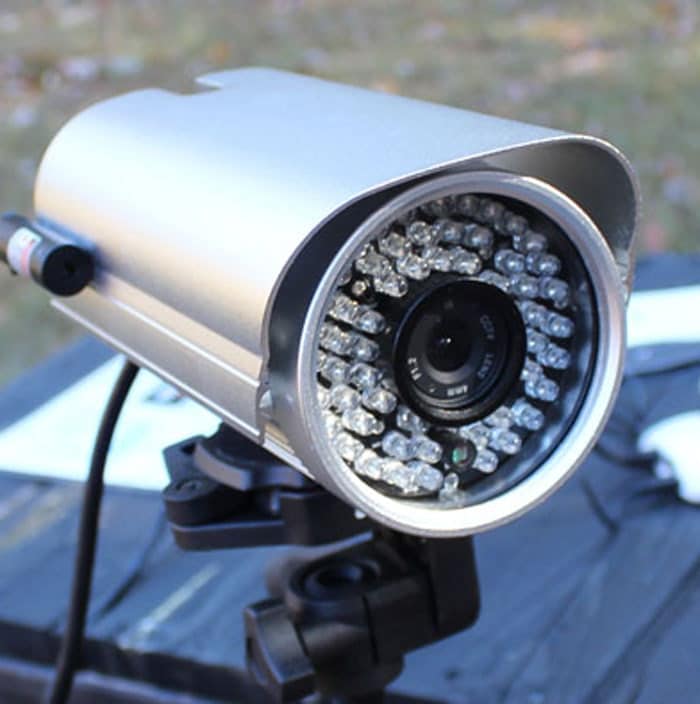 The camera. (Photo by David Higginbotham)

The camera is the coolest piece of hardware.  It is waterproof and has night vision capabilities (though I haven’t tested that with live fire, yet).  Simply place the camera a few feet from your target and aim it at the center with the aid of the camera’s laser aiming device.  Once on, it focuses on the target, instantly recording even tiny changes.

The camera’s signal is transferred to a router.  From there, it hits the transmitter that will shoot the signal up to 1,000 yards.

Everything downrange is powered by a rechargeable battery that will last between 5 and 6 hours.  All of these various parts that you need (the camera, cables, battery, charger, tripod, transmitter, instructions and software) are all contained in a very well designed carrying case that can hold all of the electronics while the camera is in use.

You will need a computer.  The software is aimed at Windows users, right now.  Other platforms are in the works.  With a laptop beside you at the shooting bench, each shot becomes instantly visible. 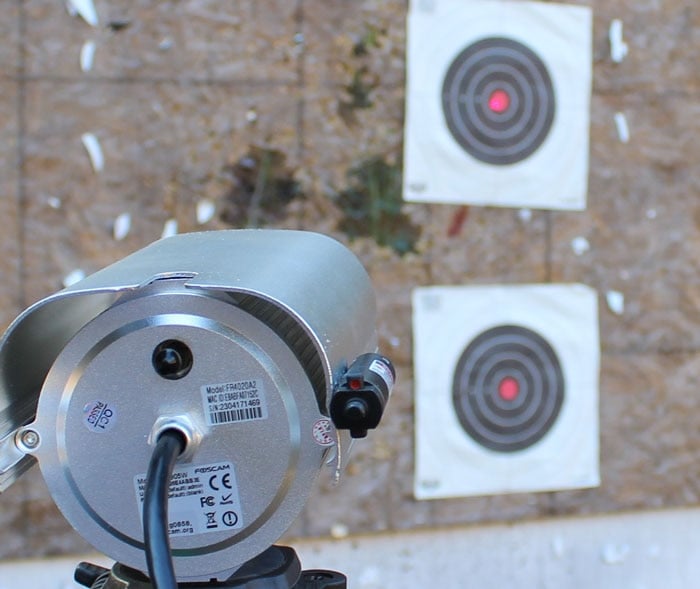 It is almost impossible to keep track of multiple hits on paper targets.  It is even harder at 1,000 yards.  Even with a great spotting scope, shooters lose track of hits.  If there were no other attractions besides a flashing shot indicator, the Bullseye Camera System would be worth it.

The software, though, helps keep track of all of the data.  You can register multiple shooters, record information about distance, firearms, ammunition and conditions.  If you need to go back through a range day and check which ammunition was most reliably accurate, the BCS software makes it easy.

We used the system on one long range day.  It took about 10 minutes to get the software loaded up and figured out.  The hardware set up took less time.  The system comes with a laminated sheet of easy to use assembly instructions and the cables are color coded.  In all, I’d say about two minutes worth of set up. 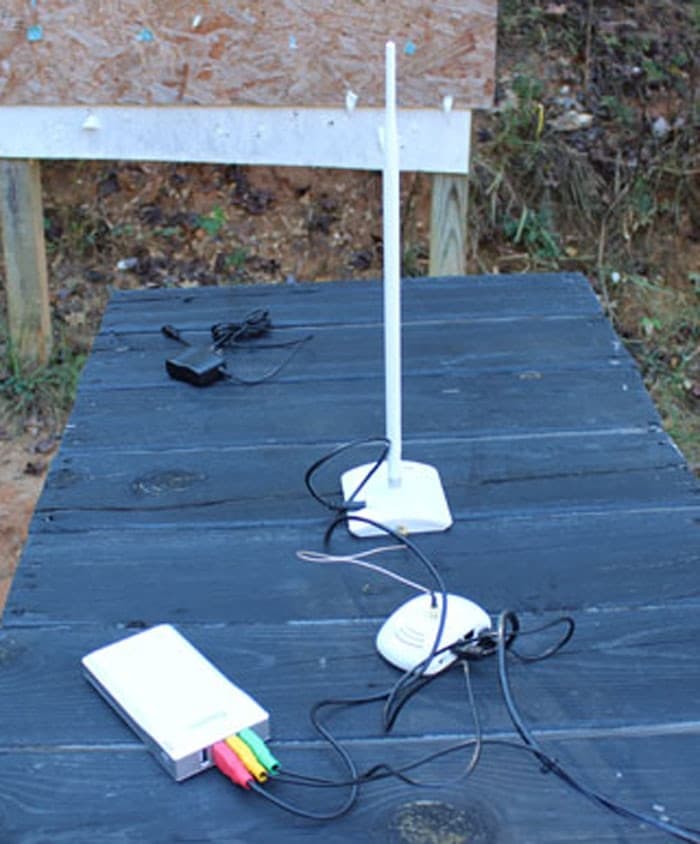 The battery, router, and transmitter. (Photo by David Higginbotham)

I expected to encounter some issues.  I always do when electronics are involved.  But no.  Not one.  We cut the system on, walked back to the bench, flipped open the laptop and began.

The only problem we encountered had to do with the orientation of the range.  We were in hard sunlight, which made reading the laptop screen more complicated than it should have been.  Though the dot from a bullet’s entry on the target will flash, you still need to be able to see the computer’s screen.  We ended up propping up cardboard shades around the computer in an effort to make things more visible.  It worked well enough, but wasn’t too romantic.

It works amazingly well.  We had sighted in one rifle that was shooting sub MOA groups at 100 yards.  Through a spotting scope, we couldn’t get a read on the hits.  We had to take it on faith that they were going in the same ragged hole.  But with the BCS, the changes in the edges of the ragged hole were picked up, transmitted and easily reviewed. 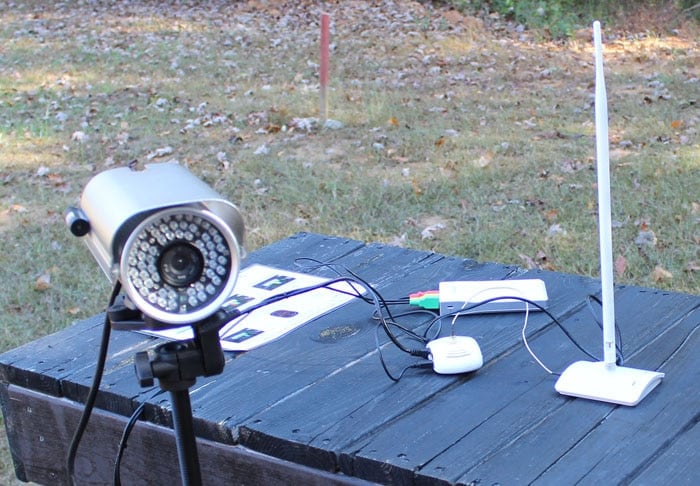 You can keep it in its case, or spread it out. (Photo by David Higginbotham)

How much does it cost?

The 1,000 yard kit costs $549.  There is a 500 yard version that is slightly less.  Still, that’s real money.  I would assume you would need to do a fair amount of shooting to justify the expense.  But it is worth it.  If you need a version that can transmit to 2,000 yards, they make one of those, too.  And if you need a laptop, they can package one into the system.

I kind of feel like I am preaching to the choir on this one.  It is like having instant replay, only without the sound.  Every shot you make, assuming you are actually on the paper or steel or whatever, will show up perfectly.

The system is versatile enough to use with any type of firearms and it works with archery.  It really, genuinely works.  They’re working on smart-phone software now and when they work out those bugs, this will be the perfect target monitoring system.  It is brilliant and effective and couldn’t be any easier to use.  Check out what it can do.  Go to the BCS sight and watch the rest of their demo videos, and then trust that the real deal is even more impressive in person.