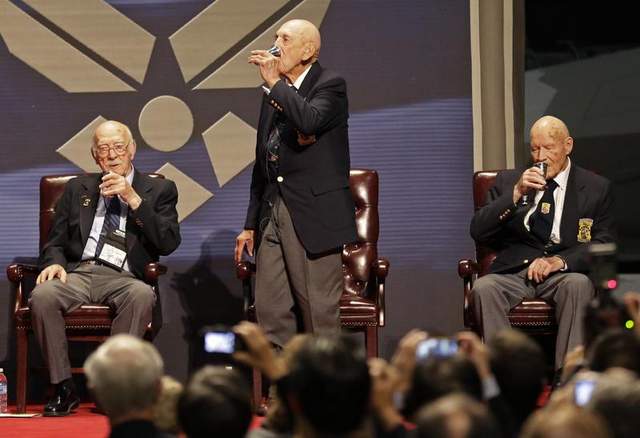 Three of the four surviving Doolittle Raiders toast for what will be the last time.

The surviving World War II heroes known as the Doolittle Raiders gathered for their final annual toast over Veterans Day weekend at the National Museum of the U.S. Air Force in Ohio.

The Doolittle Raiders were a group of 80 servicemen who after the Japanese attack on Pearl Harbor, volunteered for high-risk missions that not only boosted American morale, but showed the enemy we were nowhere near defeat. The annual ceremony was started by the Raiders’ late commander Lt. Gen. James “Jimmy” Doolittle, but after many years of gathering, the four surviving men have decided to make this toast the final one, Military Times reported. Cole opens the 117-year-old bottle of Cognac passed down by Doolittle and saved for just this occasion.

“May they rest in peace,” said 98-year-old Lt. Col. Richard Cole as he and fellow Raiders 93-year-old Lt. Col. Edward Saylor and 92-year-old Staff Sgt. David Thatcher raised their specially engraved silver goblets and sipped on the cognac saved for just this occasion. At over a hundred years old, the 1896 cognac was passed down from Doolittle to mark the final chapter of the ceremony.

Hundreds gathered at the ceremony, including family members of deceased Raiders, waving American flags and peering on as three of the four remaining members called out “here” after a historian called out the 80 names of the original airmen. The fourth surviving Raider, 93-yearold Lt. Col. Robert Hite, was unable to travel due to health conditions but donned his Raiders blazer and other traditional garb as he made his own salute form his home in Nashville, Tennessee.

Ever humble, the Raiders said they didn’t realize at the time their actions would be considered an important historical event that turned the tide of the war. Their missions may have caused little physical damage, but they were significant enough to alter Japanese strategy and rallied Americans.

“It was what you do,” Saylor said in an interview. “Over time, we’ve been told what effect our raid had on the war and the morale of the people.” 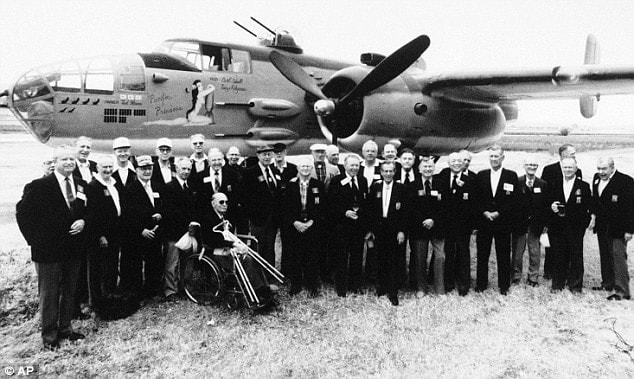 Thirty Raiders pose for a picture in front of their B-25J bomber in Torrance, California on April 17, 1987.

For Thatcher, the missions were just another day in the life of a Raider and seemed to be only “one of many bombing missions” during the war. He narrowly escaped death when his plane crash-landed, as depicted in the movie, Thirty Seconds over Tokyo.

The 80 silver goblets were presented to the Raiders in 1959 by the city of Tucson, Arizona and have each respective Raiders’ names engraved twice, once right-side up and once upside-down. The goblets belonging to the deceased were placed upside-down.

Embodying the essence of respect, 12-year-old Joseph John Castellano attended the ceremony and said of the war heroes, “This was Tokyo. The odds of their survival were one in a million. I just felt like I owe them a few short hours of the thousands of hours I will be on Earth.” 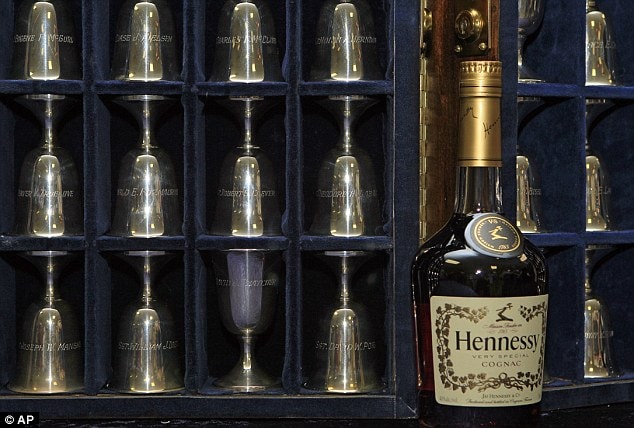 The goblets belonging to the deceased Raiders are placed upside-down.