After a long wait Anschutz is announcing the availability of their Modern Sporting Rifles, or MSR RX22 Tactical Trainer target and small game rifles. Chambered for .22 Long Rifle, these precision guns are the result of a joint effort between Austrian firms Anschutz and ISSC.

Using ISSC MSR MK22 chassis, Anschutz builds their Tactical Trainers to the same level of performance the world has come to expect from the top-flight competition and hunting rifle manufacturer. The ISSC chassis is patterned off the FN SCAR and is a big departure from the types of rifles Anschutz is known for.

Anschutz makes the rifles with their own target barrel and custom hand-polished adjustable trigger to complete the package for a series of guns that run like SCARs but shoots like, well, Anschutz rifles. 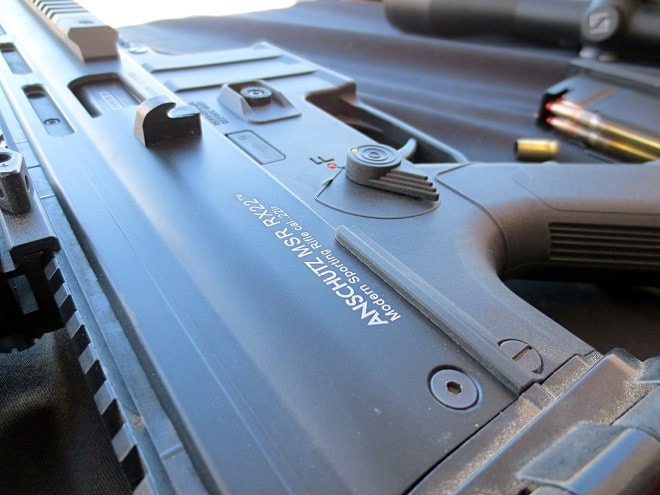 We spent some time with Anschutz at SHOT Show earlier this year and have to say that the MSR series will easily outperform most shooters and can absolutely be considered a target or competition rifle out of the box, even with its tactical styling.

Anschutz developed their own type of button-rifling process for their target rifles and uses it with all four MSR models. The barrel is then finished with a recessed target crown to ensure accuracy for a very long time. They also developed a hardened single-stage fire control group with a trigger that’s user-adjustable from 3.3 to 5.5 pounds.

The MSR RX22 series rifles use “force-locking” blowback and have hammer locks both of which promise improved accuracy compared to the average semi-automatic .22.

The design is fairly ambidextrous as well, with controls on both sides of the guns for left- and right-handed shooters including the safety and magazine release and it has a reversible charging handle that can be set in not two but six different positions on either side of the rifle.

Of course, they’re more expensive than your average semi-auto .22, too, with suggested retail prices of $895 to $995, depending on the model and configuration; real-world pricing is sure to be less by at least $100, probably closer to $200. The Standard Black and Desert tan models have folding polymer stocks and Picatinny-railed handguards and for all purposes look like FN SCAR rifles.

One hundred dollars more gets people the option of the Precision and Precision Black models, which combine the alloy and polymer design with traditional wood for the stocks and handguards, for a little new and a little old in the same package.

All models have the same full-length flattop rail for optics and accessories. They weigh 6.94 pounds with their hard-anodized aluminum receivers and standard 16-inch match barrels. Anschutz is shipping the guns with ten-round magazines and will carry two-, five-, 20- and 22-round magazines.

Whether you’re looking for a high-end precision plinker, an entry-level competition rifle, a small-game gun with rails or just want a .22 rimfire that could easily pass for an FN SCAR, you should look into the Anschutz MSR RX22 Tactical Trainers. They’re a little more expensive than most .22s but they have a lot to offer.