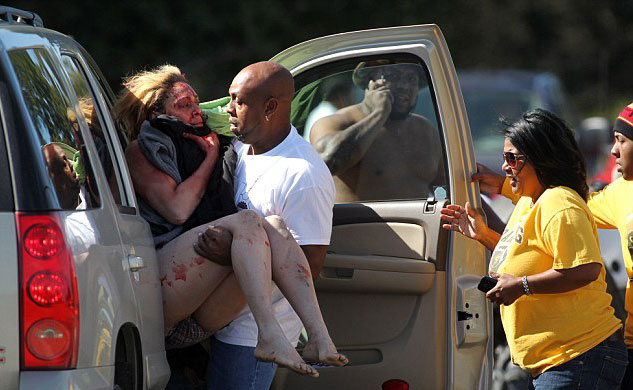 Marcus Arceneaux carries his niece, Bethany, after she was kidnapped and stabbed. (Photo credit: AP)

About half a dozen family members of kidnapped victim Bethany Arceneaux took to the woods near Duson, Louisiana Friday in hopes of finding her. Not only did they find Arceneaux alive, but the intense confrontation ended in her captor, Scott Thomas, being fatally shot.

Arceneaux was abducted by Thomas Wednesday night after picking up her 2-year-old son from daycare. Thomas, who is the father of Arceneaux’s son, forced her into his car, leaving the child behind, local reports. But a woman who witnessed the abduction stepped in to help protect the child, who was unharmed.

A few hours later Thomas’ car was found abandoned about 9 miles away, not too far from where Arceneaux was found two days later.

After days of posting fliers and searching for Arceneaux, apparently the woman’s family received a tip early Friday to search an abandoned house near where Thomas’ car had been found. Several family members as well as local law enforcement returned to searching for the young mother in the area.

During the search, the woman’s family came upon the abandoned house and when they heard screams and cries coming from inside, they knew they had found where Arceneaux was being held.

However, when Thomas heard the family closing in, he began stabbing Arceneaux, her screams and pleas for help filling the air. A confrontation between Thomas and the family ensued, then one of the family members, who was armed with a gun, shot Thomas during the confrontation, before he could harm Arceneaux any further. 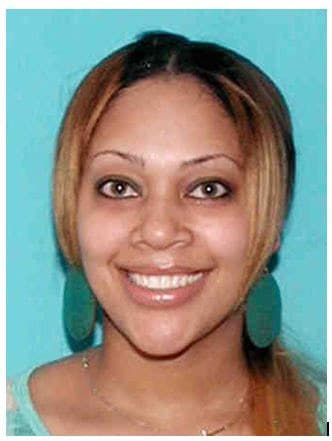 “She’s shook up, she’s sliced up, but she’s alright,” said Ryan Arceneaux, the woman’s brother, who along with other family members entered the house where she was found. “We found her. We went and got her in that house. We kicked doors down. It was like a movie unfolding.”

When authorities arrived at the abandoned house, Thomas was already dead. According to Capt. Kip Judice of the Lafayette Parish Sheriff’s Department, Thomas was shot at least three times.

Arceneaux’s family is just grateful that she is still alive.

Apparently Thomas had a history of violence. In fact, court records show that Arceneaux filed a restraining order against Thomas on June 15, which was granted two days later. According to a complaint filed with the police department, Thomas locked Arceneaux and their toddler in her house and threatened to kill them both.

“He grabbed our son from me and shoved him into the car,” Arceneaux wrote in the report. “Since then, Scott has been riding around my mom’s house and my work looking for me. I am afraid for me and my son’s life. … He keeps threatening to kill us. He put a knife to my neck countless times.”

Then on Aug. 8 Thomas was arrested for violating the restraining order and also charged with aggravated assault and aggravated flight from an officer.

“She was very afraid of him,” Arceneaux’s cousin, Dawnetta Roy, told reporters.

Authorities did not state which family member shot Thomas during the confrontation Friday or whether the gun was legally owned and carried. They did however say that he has been very cooperative with investigators.

“He did what he needed to do to stop that aggressive behavior from Mr. Thomas,” Judice said. 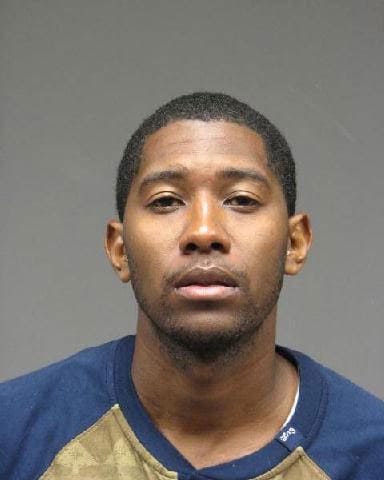 “I can just imagine how chaotic that confrontation was. The person who acted in defense of Ms. Arceneaux is a relative, a close relative to her. So I can imagine his emotions were probably high, and everyone’s levels were very escalated,” Judice explained.

At this point no charges have been filed against that family member for the shooting death of Thomas, but the case has been forwarded to the district attorney for review. However, no charges are expected to be filed either.

“Private individuals as well as law enforcement officers can rely on the concept of ‘defense of others’ when the other is facing a threat of death or great bodily harm,” Cheney Joseph Jr., law professor and vice chancellor for Academic Affairs at LSU Law Center, wrote in an email to The Daily Advertiser in response to the case.

In other words, in the state of Louisiana, deadly force can be used not only in self-defense, but while defending another person who, for whatever reason, is unable to defend themselves at the time.

Arceneaux was released from the hospital on Monday, has been reunited with her baby boy and is said to be doing well. Harold Carter, Arceneaux’s brother said he visited her on Saturday while she was still in the hospital and said that she was up and about “talking, laughing and joking.”

Carter stated that he hoped Arceneaux’s story would be an inspiration to other women who are in abusive relationships to get out before the violence escalates.

“You know it’s very tragic. I don’t want to take that away from it. But we have a lot to be thankful for; No one else was hurt, no law enforcement officers were hurt, Ms. Arceneaux is going to recover and that’s a good thing,” Judice said.