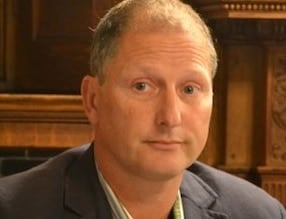 Imagine this scenario for a moment:

It’s a Tuesday evening. You’re sitting at home watching the nightly news and you hear a knock on your front door. You didn’t order pizza, you’re not expecting any visitors and you already received your daily mail delivery, so you’re not really sure who it could be. But whatever, you answer the door to find two police officers standing on your front stoop.

You know you haven’t done anything wrong, but in that very brief instant upon opening the door and making the discovery that there are two patrolmen at your home your mind begins to race and you question whether maybe you had a parking ticket that you forgot to pay or maybe you were speeding on your way home from work and didn’t know it, but none of that makes sense so your attention shifts to other possibilities, maybe there’s a lost child in the area or a feral cat attack or maybe there was an incident involving one of your ornery neighbors…

Finally, as that second or two of mental ideation elapses, you stop speculating and prepare to address the officers. You say the most obvious thing that comes to your mind: “Can I help you, officers?”

“According to our records you, Mr. (your last name), are a registered gun owner,” says one of the officer. “Is that correct?”

“We’re here to inspect your guns to ensure that the are safely locked away,” says the other officer. “If you point us to the direction of your storage room or gun safe we can begin the inspection.”

“It shouldn’t take that long,” he adds.

This scenario, as unbelievable as it is, is not that far-fetched, especially if you one of the 600 or so registered gun owners in Swampscott, Massachusetts, a town located about 15 miles north of Boston.

According to the Swampscott Patch, Selectman Barry Greenfield allegedly flirted with the idea this past Wednesday, at a Swampscott Board of Selectmen meeting, as a way to enforce a Massachusetts law (Chapter 140, Section 131L) that states it’s “unlawful to store or keep any firearm … in any place unless such weapon is secured in a locked container or equipped with a tamper-resistant mechanical lock or other safety device, properly engaged so as to render such weapon inoperable by any person other than the owner or other lawfully authorized user.”

“We need the ability to enforce the state law,” Greenfield said, according to the newspaper.

Well, news of this highly controversial suggestion or insinuation went viral. And soon, Greenfield was taking a lot of heat from concerned citizens and gun owners.

Greenfield felt obligated to respond to his critics. So, he did. On Monday, he published an editorial in the Boston Herald, “I want to protect kids, not trample rights,” in which he denied explicitly stating that police should go door-to-door to conduct gun-safety home inspections.

“The state law says that gun owners must have their weapons locked or kept in a safe only accessible by them. I never asked if police could be given permission to search and seize without a warrant. Rather, I simply asked for an expert opinion on whether an existing state law can be legally enforced,” explained Greenfield.

Greenfield said that ensuring guns are safely secured may help prevent another mass shooting like the one at Sandy Hook Elementary School in Newtown, Connecticut.

“I made this request in the context of school shootings, as the research I have read shows the majority of these shootings are caused by children who have access to their parents’ weapons,” he said.

Greenfield then expressed concern about the nature of the dialogue, which he claims was “uncivil” after the story broke, primarily in the form of “threatening emails and calls.”

“What I don’t understand is how we came to a place in time where asking questions and suggesting ideas was deemed to be unreasonable and unacceptable,” Greenfield said.

“Again, my priority here is protecting children in schools. At the same time I have no interest in trampling on the Constitution’s Fourth Amendment, or, just as importantly, the Second Amendment,” he concluded.

Though, one has to ask the question, how does one enforce a Constitutionally unsound law that requires gun owners to keep their firearms under lock and key without having a third party there to verify the firearms are actually secured?

That’s like saying, is there a way to go skinny dipping without getting wet?  Answer: no, there’s not.

Greenfield’s implication was pretty clear. He shouldn’t try to hide from it. Besides, he’s probably not the only lawmaker or politician who  supports door-to-door government gun safety inspections.