The number of women arming themselves with firearms has increased by 77 percent over the last seven years.

Not surprisingly, the more women learn about guns, the more they realize the farce of the anti-gun message—guns are not evil, they are empowering, especially for women.  Nevertheless, the answer to this feminine firearm inflation remains somewhat furtive to some folks, though it would seem one simple explanation lies right out in the open: male-female relationships.

My wife, a former Marine, recently pointed this out to me.

Though she and I are both Marine Corps vets, my wife’s previous experience with guns was probably not all that unlike other women’s. Prior to her commission in the Marine Corps, she had never fired a gun in her life and for the most part, her interest in guns has been shaped entirely through male influences. Fortunately, the instructors who have trained her have been positive, encouraging, and knowledgeable.

Nevertheless, my wife’s most serious interest in guns came after she completed her Marine Corps commitment. In fact, her current enthusiasm for guns stems more from my own, and mine has also increased since the Marine Corps but in truth wanting my wife to have an ability to protect herself in situations I prefer not to imagine is what has actually motivated me to make guns a part of our daily life.

But then I understand that trying to ignore the ugly realities or just wish them away does not make women safer.  Guns in the hands of women who know how to use them do.  Many, it seems do not.

As for my wife, whenever people meet her, they are usually quite surprised to learn that she is a former Marine. Weighing about 125 pounds, she does not have the imposing presence that many civilians or America’s enemies imagine when they think of the Marine Corps. But despite my wife’s small stature, she is athletic. As a Marine, she could max the male Marines’ PFT (physical fitness test), decidedly impressive because the average male Marine does not even max this test.

With that said, my wife is a realist. She understood that just about any male Marine would have brutalized her in a fistfight. She also realized that she was not built to carry 200-pound wounded Marines to safety during combat. But not all Marine specialties require those physical attributes as every Marine is a rifleman.

My wife was (and still is) an expert marksman with a rifle and a pistol. Armed, she has the ability to turn the tables on any threat and the instinct to neutralize it. By God’s grace and my wife’s conscious efforts to avoid bad situations, she has not found herself in a life-threatening situation such as this. She does, however, train and prepare with guns to improve her chances should she ever be forced to fight back.

Many people ask if there is some trick to sparking a woman in their life’s interest in guns. I believe the answer to motivating anyone to tackle challenges they might not attempt on their own is: leadership. 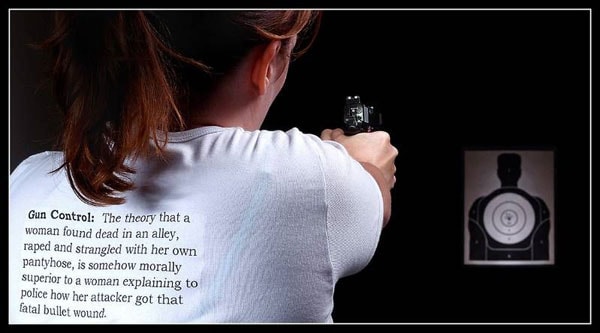 The Marine Corps has mastered the art and science of producing leaders and one of the responsibilities all leaders have is to challenge others to step outside their comfort zones. Obviously, this concept is an enigma to most of our politicians who have never served a day in the military. Instead of encouraging people to be more self-reliant, progressive bureaucrats seek to make people just comfortable enough to depend on the government for absolute security.

The seething contempt many elected officials have for guns coupled with the media’s negative depiction and many women’s simple lack of firearm experience intimidates a lot of women away from ever wanting to learn about them.

Some politicians have accomplished nothing more than incapacitating women by fostering a false sense of safety along with an irrational fear of guns.

In my wife’s case, she was at least open to learning about guns, but like a lot of people, she did not believe she needed one for personal protection. Why would she? She has been blessed her entire life with never being a victim of an unpredictable criminal attack. But a combination of my interest in true crime stories, as well as her own improved awareness of what happens daily in the news has convinced her that guns are now essential.

That’s a key ingredient for anyone looking to find the “carry mindset”: She sees guns as a basic part of her daily life because she knows criminals prefer weak and unsuspecting victims. By carrying a gun, my wife has at least made a criminal’s occupation far riskier should she become a target. Hopefully, she will always avoid an encounter with predators by making good decisions and maintaining situational awareness, but if an encounter can’t be avoided, she will certainly have a better chance of winning the fight than she would have if she were unarmed.

Men should encourage every responsible woman they know to become familiar with firearms. Motivate them to step outside their comfort zones and to learn about guns. And since leadership requires maturity and tact, men also need to realize the negative impact they can have on women’s perception of firearms by doing some of the foolish things found on Youtube. Giving people guns they are not prepared to handle is dangerously irresponsible, as well as deadly.

Patience, understanding, and encouragement go a long way with anyone, but particularly with ladies whose perception of guns may be tainted by the anti-gun crowd’s deceptive portrayal of guns and gun owners, most of whom are responsible people.  Though anti-gun activists and their politicians continue spinning a fictitious gun narrative, current gun sales prove that women do not need to be steely-eyed-killer Marines to embrace firearms. Then again, even Marines can benefit from a little encouragement to arm themselves in their personal lives…