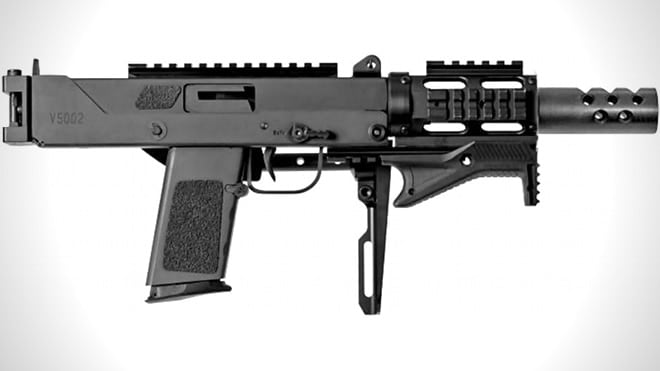 The 5.7x28mm round was developed specifically for SBRs, specifically the FN P90, which is not available on the commercial market. FN does make the PS90, a version of the P90 with a 16-inch barrel for the general public, but the bullpup is expensive and rare.

MasterPiece Arms’ MPA570SST-SBR fills the gap quite nicely. Patterned off the MAC series of submachine guns, the MPA570SST-SBR has a modified, angled pistol grip and uses standard FN Five-seveN magazines, which come with 10-, 20- and 30-round capacities.

The SBR has an 8-inch, 1/2-28 threaded barrel fit with a custom in-house muzzle brake. The barrel is ready to go with MasterPiece Arms’ 5.7x28mm suppressors, naturally. The 8-inch barrel makes it a compact package for sure. It also lets the cartridge stretch its legs compared to the handful of 5.7x28mm pistols, which invariably sacrifice a lot of muzzle velocity.

The design has a  handful of features that make it more interesting than a vanilla MAC firearm, including MasterPiece Arms’ padded folding tube stock. The folding stock doesn’t interfere with the charging handle and the gun can be fired without extending the stock. The gun has a charging handle on the side freeing up the top for an anodized aluminum Picatinny rail for optics. The SBR also has a quad rail hand guard up front that comes with a Strike Industries angled fore-grip standard.

But what really sets the MPA570SST-SBR apart is the price tag. MasterPiece Arms set the MSRP right at $800, which means even with the tax stamp it’s more affordable than a PS90.

If you’re interested in a 5.7x28mm SBR there aren’t a whole lot of options on the table.  The MPA570SST-SBR stands out from the rest on that basis alone. If you’re not interested in an NFA-regulated gun but like what you see here check out the other MPA570-series guns, including a full-size carbine and a series of MAC-style pistols.

MasterPiece arms has had a big year, introducing several new firearms and an updated line of suppressors.

Their big announcement came recently with the launch of the MPAR-556 rifle, which can be described as an AR-15 alternative. At a glance the rifle might be mistaken for an AR-pattern gun but it’s significantly different, down to the materials used. The MPAR-556 uses stamped steel for the receivers for added strength without extra weight.

It’s a piston-driven rifle that has an enclosed recoil assembly that runs along the top and front of the bolt, eliminating the need for a buffer assembly. Because the MPAR-556 uses a piston system the rifle is free to use a side-folding stock.

The side charging handle is non-reciprocating and doubles as a forward assist. Some parts are interchangeable with the AR-15 including the butt stock, pistol grip and of course, the magazine. The MPAR-556 is available in both rifle and pistol configurations.

MasterPiece Arms’ updated suppressors include the Vigilant II and Sentinel II. Both are designed to be low-cost hard-use alternatives to some of the bigger names in the world of suppressors. They join the Murmer II, their 5.7x28mm suppressor.