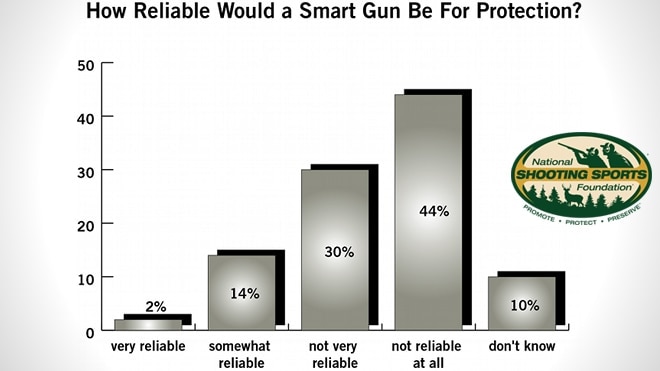 The National Shooting Sports Foundation (NSSF) has just published the results of a McKeon & Associates survey that shows a large amount of distrust of so-called “smart gun” or “personalized gun” technology and any regulation to require its use.

Smart guns are firearm equipped with electronic radio frequency or biometric scanners that disable themselves when not in the right hands. Without the pre-selected RFID tag or palm or fingerprint scan, the guns will not fire.

Although it’s well-meaning safety mechanism, in the end most Americans don’t trust the existing technologies and would be opposed to a smart gun mandate. 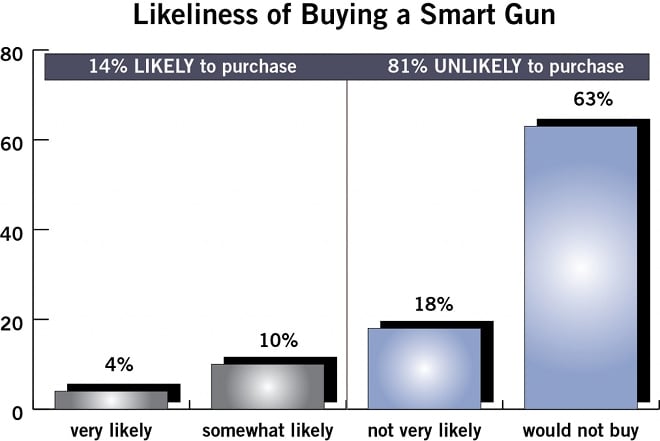 There has been a push to explore and develop the technology this year as part of a national call for increased gun control. Vice President Joe Biden urged people to look towards smart gun tech during the administration’s gun control push. And it was highlighted in the most recent James Bond movie, even if it was just movie magic.

““The National Shooting Sports Foundation does not oppose the development of owner authorized technology for firearms and, should such products come to market, individuals should be able to decide for themselves whether they want to purchase them. However, we do oppose legislative mandates that would require manufacturers to produce only such firearms,” said Larry G. Keane, NSSF senior vice president.

It would seem that the recent advances in what is more accurately known as authorized user recognition technology are not enough to get people to trust or adopt smart guns.

“We commissioned this poll to help determine where Americans stood on this issue,” Keane said. “We are not surprised, frankly, to find that the majority of those polled were skeptical of this technology, although the margins were perhaps higher than even those of us familiar with the arguments would have expected. We are encouraged by the fact that seven out of ten of those surveyed did not believe the government should mandate the one-size-fits-all approach of so-called smart gun technology.” 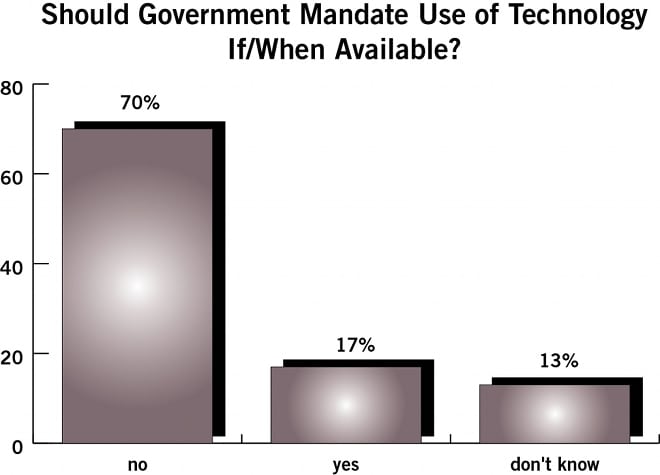 To be certain the concept of the smart gun has its flaws and shortcomings and are currently not 100 percent reliable, no matter what scanning system is in use. Some gun owners are opposed to smart guns on more philosophical grounds — people don’t trust remote, battery-operated wireless safeties that can’t be disengaged manually and worse still, may be jammed or disabled intentionally.

“Asked ‘How familiar are you with efforts to develop a firearm that will only fire for a specific authorized person(s)?,’ only 20 percent of respondents said they were very or somewhat familiar with the concept of smart gun technology,” explains the NSSF.

“To the question, ‘How likely would you be to purchase a gun with smart gun technology that prevented it from firing except for specific authorized users?’ an overwhelming 74 percent of respondents overall said that they would not buy or would not very likely buy such a firearm,” added the NSSF. Only 14 percent of those surveyed said they would consider purchasing a smart gun. ”

Here are the poll’s demographics.

Do you think that “smart gun” technology will ever be as reliable as “dumb guns,” and if so, do you think you would buy one?