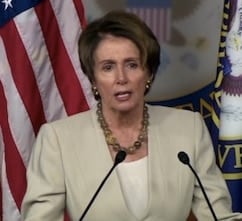 At a Wednesday press conference to honor the 20th anniversary of the passage of the Brady Handgun Violence Prevention Act, gun control advocates and pro-gun control lawmakers gathered on Capitol Hill, promising to ‘finish the job’ as it relates to universal background checks.

“I’m ashamed to be here to face all of you [and] not have finished the job yet,” House Minority Leader Nancy Pelosi said to the crowd. “We must be relentless in how we pursue this, how we protect and defend the American people.”

Pelosi believes that the onus is on the House to push through an expanded background check bill, since the Senate failed to pass one back in April. She argued that if the House passed a bill, the Senate would then follow suit.

“I believe if the bill were taken up in the House that it would pass. And when it passes the House, some senators … would no longer have the excuse, ‘It’s no use my risking my political career because it’s not going anyplace in the House,'” Pelosi explained. “Let’s turn that around, pass it in the House and just put the pressure on to take up the bill. Why not?”

Sponsored by Reps. Mike Thompson (D-CA) and Peter King (R-NY), the House expanded background check bill is identical to the Senate version, which was sponsored by Sens. Joe Manchin (D-WV) and Pat Toomey (R-PA). If passed, private gun sales or transfers made via the Internet or at gun shows would require a Federal Firearm Licensee-facilitated background check.

However, family transfers and some private sales between friends, neighbors and other individuals would be exempt from background checks.

“Twenty years ago the Brady bill was passed and signed into law. Now it’s time for Congress to finish the job by passing my bipartisan bill that will expand comprehensive and enforceable background checks to all commercial gun sales,” said Thompson, the chair of the House Gun Violence Prevention Task Force.

“If this bill is passed, criminals, terrorists, domestic abusers and other prohibited purchasers wouldn’t be able to bypass a background check by simply buying a gun online, through a classified ad or at a gun show. This bill will save lives and respects the Second Amendment. It deserves a vote. And, it deserves to be signed into law,” he continued.

Though, with 14 legislative days remaining for the House in 2013, with 2014 mid-term elections looming in the distance, with 185 co-sponsors, short of the 218 needed to pass a bill with a simple majority, and with tepid support from GOP lawmakers, only three Republicans have co-sponsored the bill, it doesn’t seem likely that the expanded background check bill will come up for a vote in the near future.

Nevertheless, many believe that the atmosphere is right to reform the nation’s gun laws.

“We have the same conditions now that we had back then, which we didn’t really have even five years ago,” said Sen. Charles Schumer (D-NY), alluding to the outpour of support for tougher gun laws from various gun-control organizations in response to recent mass shootings, e.g. Mayors Against Illegal Guns, Americans for Responsible Solutions, Moms Demand Action, etc.

“So we’re going to pass this law,” he continued. “We are going to finish the job and pass background checks and then move on and do other things we have to do to get guns off the streets and stop gun violence.”

“Momentum is on our side. The will of the American people will not go away. The original Brady law took six votes over seven years to pass. We hope to achieve change even sooner this time, but whatever it takes, if it does something real to prevent more people from getting shot and killed, it’s worth it,” exclaimed Gross.

To help get the message out, the Brady Campaign released this Internet ad: