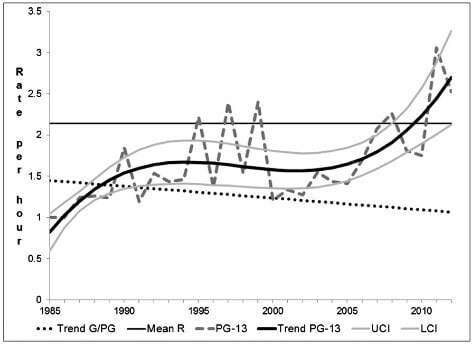 The rise of violence in movies over the last three decades. (Photo credit: Pediatrics)

Violence in PG-13 rated movies has steadily been rising for nearly 30 years, with some containing even more violence than their R-rated counterparts, according to a study published this week in the journal of the American Academy of Pediatrics.

The study found that violence – particularly gun violence – has tripled within the PG-13 rating over the last 27 years, while the violence among the G, PG and R rated movies has remained relatively constant. While violence in movies overall has more than doubled since 1950, by 2009 the amount of violence depicted in PG-13 movies was comparable to that of rated R movies, and in some cases, the number of violent scenes in PG-13 rated movies exceeded that of R-rated movies by 2012.

The PG-13 rating was established in 1984 as a better way to rate movies that weren’t quite worthy of an R rating, yet still contained material that was a bit too questionable for the younger eyes of a PG rating.

However, according to the LA Times, the Motion Picture Association of America has come under scrutiny in the past for supposedly taking what seems like a more narrow-minded approach to sex and foul language while being much softer on mayhem, gore and violence.

Producer of last year’s thriller “Chronicle,” John Davis said that he believes there needs to be “clearer communication” between filmmakers and the MPAA, but also indicated that the process for obtaining a PG-13 rating has also become simpler in recent years.

“Years ago I can recall a number of fights with the ratings board where you go back and re-cut and then go back again,” Davis explained. “My experience lately is that you kind of know what you’re going to get going in.”

Even researchers found that some of the ratings of certain movies seemed questionable. For example, “The Dark Knight” was found to be one of the most violent movies examined with 23 segments containing violence, 13 of which involved guns. Yet even with high levels of violence, it still received the coveted PG-13 rating.

On the contrary, “The King’s Speech” was given an R rating for a single scene with vulgar language. Similarly, the drama “Philomena” was given an R rating because it contained the word “fuck” twice. Apparently, the word is only allowed once in PG-13 rated movies, but “Philomena” filmmaker Harvey Weinstein challenged – and won – the MPAA’s restrictive rating, demanding the movie be dropped to PG-13 instead. Weinstein argued that the rating system shouldn’t be so black and white about content but rather take into consideration the overall context of the film.

Researchers involved in the study were particularly concerned about the seemingly biased ratings system due to a phenomenon known as the “weapons effect.”

According to the theory, “the mere presence of guns can increase aggression.” Researchers worry that continued exposure to violence in films, which has statistically become greater and more extreme over the years, can cause an increase in aggression, particularly among younger children whom the PG-13 rating is deemed appropriate.

In addition to the growing violence in PG-13 rated movies, the study points out that those movies – along with even more restrictive films – are increasingly available to a wider and younger audience through venues such as the Internet and cable.

But Aris Christofides, editor of kids-in-mind.com, an independent film rating site, argues that it’s not just violence that has amplified over the years. 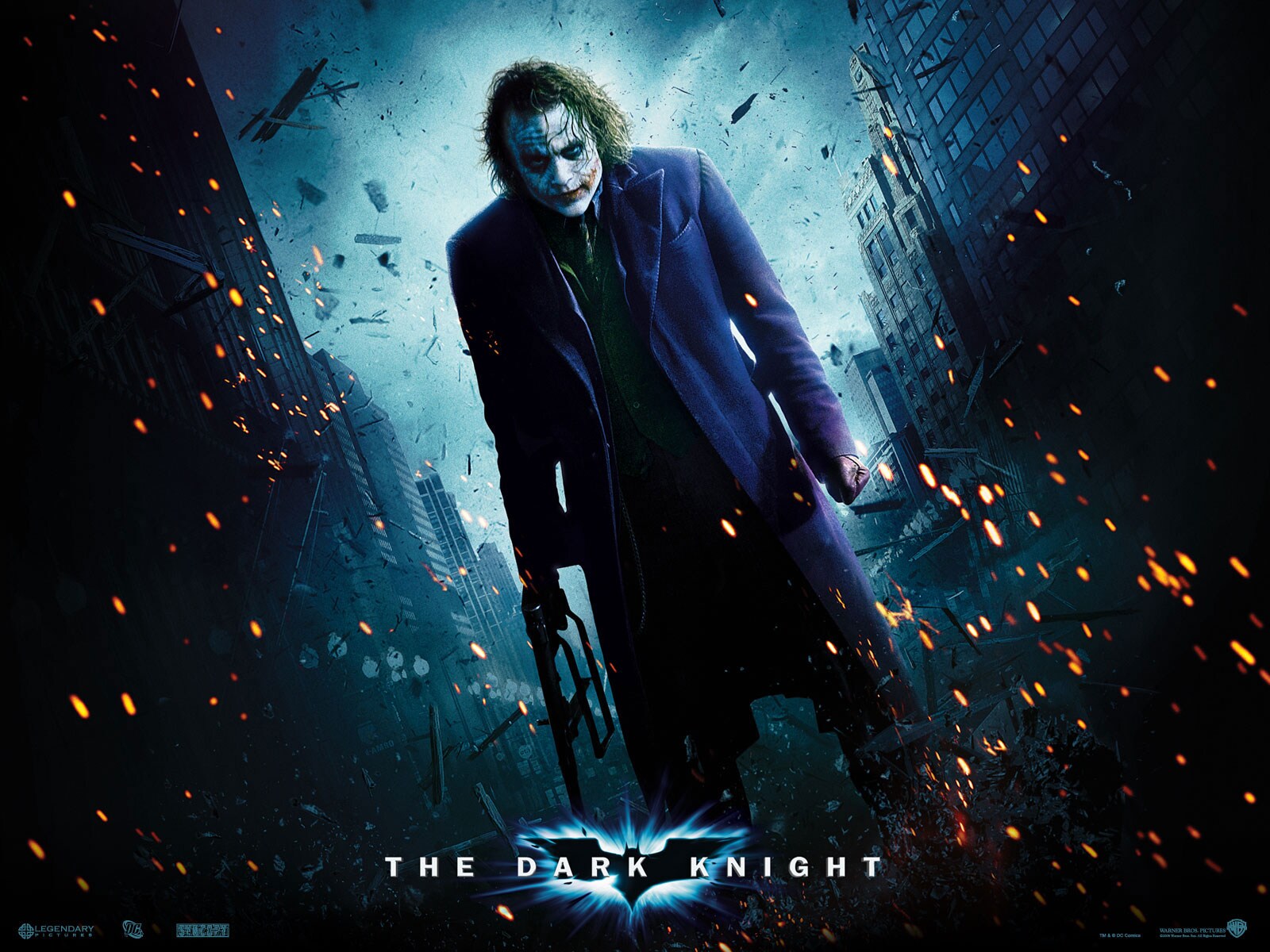 Critics of the MPAA ratings system claim movies with more mayhem, gore and violence get softer ratings than those with even brief scenes of sex or profanity. (Photo credit: Warner Bros.)

Brad Bushman, co-author of the study, feels the U.S. should implement the same movie rating system of Europe.

“The American system of ratings is totally screwed up,” Bushman said.

But Joan Graves, head of the MPAA’s ratings board, defended their system by saying, “We try to get it right. The criticism of our system is not coming from the parents, who are the people we’re doing this for.”

Graves admits that not only is the association aware of the debate on the possible effect of violence in movies in regards to school shootings and other acts of violence, the association also recognizes that “there are so many more ways of putting (violence) on the screen than there were two decades ago.”

“There is more violence,” Graves agreed, indicating that another rating category is a possibility for the future.