Tannerite PSA: 'Our product does not start fires!' (VIDEO) 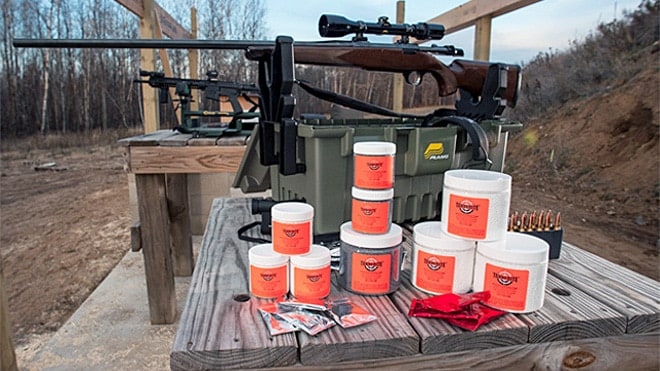 Tannerite, the company that’s synonymous with the best-known binary explosive on the market, has been working hard lately to make sure people know that their product does not start fires.

In the past year, over a dozen wildfires have been linked to the use of binary explosive reactive targets, something that Tannerite is trying distance themselves from.

“In the past year alone, at least 16 wildfires on national forests have been associated with exploding targets, causing millions of dollars in suppression costs while threatening the safety and well-being of surrounding communities,” said U.S. Forest Service chief Tom Tidwell to Fox News.

Even though it’s an explosive, the use of pyrotechnic-grade ingredients ensure that the explosions are very efficient, creating byproducts of nitrogen, water vapor, carbon dioxide and aluminum oxide. The efficiency of the chemical reaction makes a lot of energy at relatively low heat levels.

In reality, a Tannerite explosion by itself can’t ignite gasoline without some outside help, like a road flare.

However there are plenty of other binary targets that can start fires, something Tannerite says is as a result of using lower, industrial-grade ingredients. Since Tannerite holds a patent on its recipe, the company claims that other companies’ reactive targets use slightly different ingredient combinations that are often more likely to start fires.

“The chemical composition and formulation of Tannerite brand targets is exact and any attempts to modify this formulation can lead to fires and other safety concerns,” reads a recent Tannerite press release.

Because of the recent fires some people are calling for the regulation and even ban on binary explosives. Tannerite doesn’t want to be associated with any of that, for obvious reasons, and is pushing hard for people, regulators and consumers alike, to know that their product is safe to use.

The U.S. Forest Service has already banned all binary explosives in the Rocky Mountain region, an area that is already prone to wildfires.

If Tannerite is safe and other companies’ formulas are not as Tannerite claims, should the product be regulated? What’s your take on binary explosives?