Teen shot, killed during break in, two other teens in custody (VIDEO) 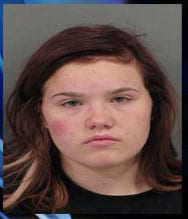 A 17-year-old boy is dead and two other teens are in custody after a homeowner shot the teen Monday during what authorities believe was an attempted burglary in Catoosa County, Georgia.

the 17-year-old and a 16-year-old knocked on the front door of the home and when they received no answer, they assumed that the house was empty. But they were wrong, the NBC Nashville reports.

Police say the teens then went into the basement to steal scrap metal while a third accomplice, 18-year-old Ansley Chrnalogar, waited nearby in a truck. Meanwhile, the 69-year-old homeowner, who did not wish to be identified or appear on camera, grabbed his revolver and went to the back of his house where he saw the teens.

“One of [the teens] had poked his head out. He told them ‘get out of my house.’ That’s when the individuals came out from there and came towards his direction,” Catoosa County Sheriff Gary Sisk said.

As the teens continued towards the homeowner, the man fired a single shot, hitting the 16-year-old in the neck.

The teens then fled the scene.

As police were responding to a 911 call from the homeowner they received a second call from the three teens requesting medical attention.

Authorities met the teens a few miles from the home where the attempted burglary occurred, and the 17-year-old was transported to a local hospital where he died a short time later.

Chrnalogar and the 16-year-old, who has not been identified because he is a minor, were both arrested and are facing felony burglary charges.

A woman claiming to be the mother of the deceased teen contacted Channel 3 News in Nashville. The woman identified the teen as Dalton McConathy through Facebook messages to the station.

“Dalton was a good kid with the kindest of heart,” the woman wrote. “He would give anybody anything he had. He didn’t have a history of being in trouble. He hardly ever even left the house.”

Calvin Wilson, who lives close to where the getaway truck stopped for help, said he was sad to hear how the incident ended.

“It’s bad that a teenager is dead because of doing a crime. Or allegedly doing a crime, however you need to say it,” he said.

“You know, it’s a very complicated situation because we do have a 17-year-old that has lost their life. It’s a sad a day for all the victims. The homeowner was just as upset,” Sisk said.

Sisk doesn’t believe that the homeowner acted maliciously when he shot the teen. “But just to flat out say if he was in the right or the wrong, I’d like to wait until the investigation is closed,” he said.

Investigators have already met the with District Attorney’s Office and as of now, no charges have been filed against the homeowner.