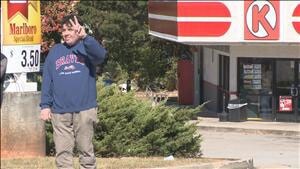 Johnny Jarriel stood outside the Circle K the week after he was fired for violating the company’s no weapons policy, encouraging customers to boycott the store for what he felt was an unjustified termination. (Photo credit: 11 Alive Atlanta)

A Circle K employee was fired after he opened fire on an armed robber two weeks ago in Douglasville, Georgia, and now he’s asking customers to boycott the convenience store, the local NBC affiliate reports.

The now former assistant manager, Johnny Jarriel, was working in the back office of the store on Nov. 2 just after 9 a.m. when a man walked in, pepper sprayed his face, slammed his head to the ground, put a gun to his head and demanded cash.

“I can’t really describe all the expletive words he used,” Jarriel told the station. “But basically ‘give me the money’ or he was gonna kill me and he was very specific about, you know, what he was gonna do to me.”

Jarriel told the man that the safe was located at the front of the store and when the would-be robber turned his back on the employee, Jarriel pulled his handgun from his pocket and fired several shots at the man. Although the suspect did not appear to be hit by the gunfire, the bullets still sent him fleeing, “like a scared rabbit” the NBC affiliate described.

The entire incident was caught on the store’s surveillance video, but the suspect has not yet been found.

Immediately following the attempted robbery Jarriel was placed on suspension and five days later he was given a notice of termination for violating the company’s “no weapons” policy, specifically for “possession/use of weapons on company property.”

While Jarriel admits that he was aware of the company’s no weapons policy, he also claims that his manager knew that he carried a gun and simply looked the other way since a store clerk had been murdered a few years ago.

“Everybody knew that I carried a weapon and I’ve been here three-and-a-half years and they knew from day one that I had a gun,” Jarriel claims.

Jarriel holds a valid Georgia Weapons Carry License and while the sheriff agrees that he had the right to defend himself, under Georgia state law the company also had the right to fire him for violation of its weapons policy.

Circle K refused to comment on the incident and as for Jarriel, “I would not change a thing,” he said. “I would change nothing — nothing would change.”

Jarriel also told reporters that he is in the process of finding a lawyer.