Up close and personal with wildlife; Elk squares off with photographer (VIDEO)

A hard-headed photographer got up close and personal with nature when an elk tried to lock horns with him.

As the photographer snapped pictures of the expansive wilderness in the Cataloochee Valley of Great Smoky Mountains National Park, a curious young bull approached. But it quickly became evident the elk was not as docile as he first appeared.

Having been conditioned to expect food from visitors and after received none from the photographer, the elk decided it was time to assert his dominance, according to the YouTuber’s description. 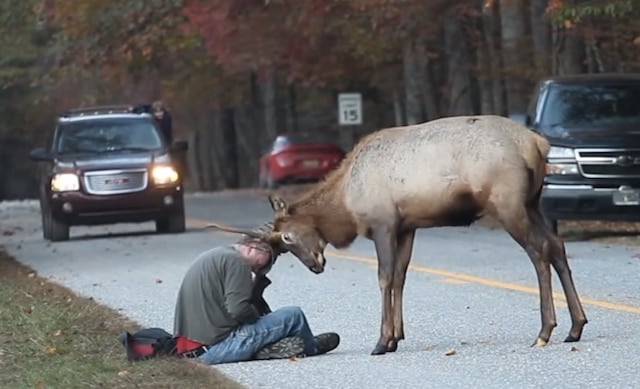 This photographer refused to back down, even after this aggressive elk continued to head-butt him.

The elk lowered its head and pointed its horns toward the photographer. As he was continually head-butted and nearly gored, the photographer kept his cool and even managed to snap a few pictures.

Several minutes later a park ranger arrived and the photographer collected his gear and stepped into the car.

Since the video has gone viral the National Park Service has chosen to put the elk down. However, the decision was based not solely on the content of the video but a pattern of aggressive behavior displayed by the elk over a period of time.