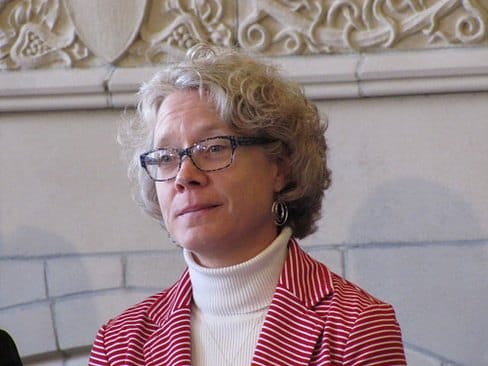 Texas A&M University Law Professor Mary Margaret Penrose said it’s time to repeal and replace the Second Amendment to the U.S. Constitution at a Friday symposium held at the University of Connecticut’s School of Law.

Citing recent mass shootings, such as the one at Sandy Hook Elementary School in Newtown, Connecticut, and the one at a movie theater in Aurora, Colorado, Penrose argued that the government and the courts were not doing enough to curb gun-related violence.

According to CT News Junkie, Penrose first asked the audience of lawyers and law school students, “How many of them felt the legislative and judicial responses to gun violence have been effective?”

Not a single person raised their hand, allegedly.

Penrose, a self-described “agnostic” on the issue of guns, went on to say that nixing one’s Constitutional right to keep and bear arms would give the state’s more latitude to decide for themselves how to regulate gun ownership and concealed carry.

Penrose also said that the U.S. Constitution was antiquated and needs to be redrafted to accord with modern times.

“Why do we keep such an allegiance to a constitution that was driven by 18th Century concerns? How many of you recognize that the main concern of the 18th Century was a standing army? That’s what motivated the Second Amendment: fear of a standing army,” she said.

All that said, Penrose is realistic about the prospects of her proposal. That is, she knows that it will likely never happen.

“Do I think this is going to happen? No. Do I think it’s a better solution than the legislative response? Absolutely,” she said.

Connecticut Gov. Dannel P. Malloy was at the event as well. While he didn’t call for an outright repeal of the Second Amendment, he endorsed the notion that states should have more control in how they restrict and limit gun ownership.

“This being a legal symposium, I’m quite certain the constitution will be thrown around quite a bit,” he said. “We support in our state the constitutional right to have arms. But no right is without its limitations.”

“There are other rights that we all agree have limitations. It really is only this one particular point that our society clashes on, and that one side honestly and I think truly believes there should be no limitations,” he continued. “But, as you can probably surmise, I think they’re wrong.”

Malloy touted the passage of the state’s new sweeping gun-control legislation, which included a universal background check mandate, an expanded ban on so-called “assault weapons,” a ban on magazines that hold more than 10 rounds of ammo, and a measure requiring gun owners to obtain special certificates for purchasing long guns and ammunition.