Shocking dashcam video was released Friday of a shooting involving a New Mexico Sate Police officer who opened fire on a mini-van full of children.

Oriana Ferrell was driving her five children to the Rio Grande when an unidentified officer pulled her over for speeding on Oct. 28, but the routine stop quickly escalated after she failed to comply with the officer’s orders, The Blaze reports.

Ferrell was pulled over for travelling 71 miles-per-hour in a 55 mile-per hour zone. As the officer walked back to his patrol car to write Ferrell a ticket, she sped away.

The officer pursued her and pulled Ferrell over again. She reluctantly complied with the officer’s order to step out of the vehicle. The cooperation didn’t last long, however, and as the mother rushed back to her car the officer went hands on.

Ferrell’s 14-year-old son rushed to his mother’s aid and tackled the officer. A short tussle ensued and both the mother and her son eventually made their way back into the minivan.

Unable to open the locked door, the officer removed his baton and smashed the window just as backup arrived on the scene. Surrounded by police, the mother sped away as another officer fired at least three rounds at the fleeing minivan. 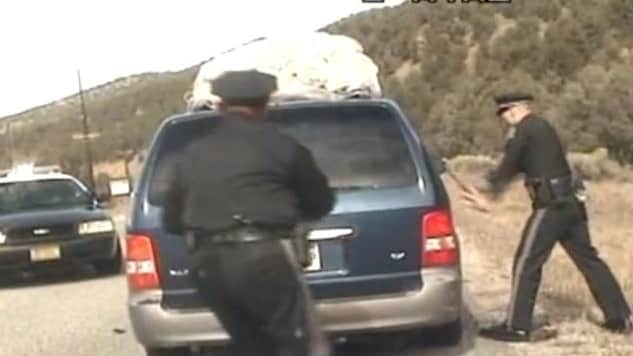 After stopping Ferrel for the second time, one officer smashed in the passenger side window and another officer fired at least three shots as the mother sped away again.

According to KRQE, Ferrell led police on a high-speed pursuit ending in front of a hotel in Taos, New Mexico. Both Ferrell and her 14-year-old son were arrested without incident.

The mother was charged with child abuse and fleeing from police officers as well as a misdemeanor possession of drug paraphernalia after police found two marijuana pipes in the minivan. The 14-year-old son was charged with battery of an officer.

The family, originally from Memphis, Tennessee, was visiting New Mexico for the purposes of an educational trip.