It’s been a long wait for Walther fans. The PPQ M2 Competition was announced almost a year ago at the January SHOT Show 2013 and hasn’t been spoken of since. According to Walther, that’s about to change with availability just on the horizon.

The PPQ M2 Competition is a modified version of the PPQ, obviously for the world of shooting sports. It comes with an extended five-inch barrel and extended sight radius to make it easier to shoot accurately. Despite having 20 percent more at the muzzle the PPQ M2 Competition weighs exactly the same as the PPQ thanks to generous slide lightening. Both of these will make it easier for competition shooters to use soft loads for improved muzzle control.

And while the longslide benefits are competition-minded, that doesn’t mean that they doesn’t translate to the real world. The Competition offers superior muzzle velocity and easier aiming over the standard PPQs, both of which make this a fine nightstand gun. Because it weighs the same it can be easily carried all day. This gun is just as suited to self-defense as it is the shooting sports. 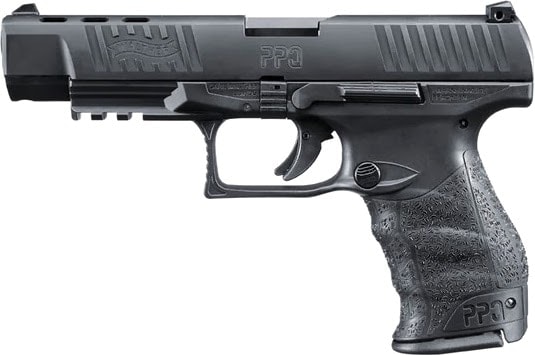 The M2 variant of the instantly-popular PPQ uses a traditional thumb button for the magazine release. The original PPQ M2 features an ambidextrous paddle release. While the M2 mag release is not fully ambidextrous, it is reversible for lefties. The PPQ M2 maintains the ambidextrous slide stop.

Walther developed the M2 for the American market which has been slow to adopt paddle releases; it was launched this year and has been very popular.

The PPQ is a revamped take on the Walther P99 series of self-defense and duty pistols. It uses a fully-set striker for a very light 5.6-pound, short and consistent trigger pull. The gun also has a short, positive reset, which is why it’s called the Police Pistol Quick.

The nature of the trigger immediately lends itself to certain forms competition shooting and it’s not a huge surprise that Walther developed a longslide variant of the PPQ — with shooters practically demanding that Walther make from day one.

In addition to having a very organic grip, muted finger grooves and a textured but not rough grip with an undercut trigger guard, The PPQ has interchangeable backstraps to ensure that it will fit shooters of all hand sizes. The Competition is no different in this regard and has the same grip and and design as the other PPQ pistols.

When it hits the market it will have an MSRP of $749, which hopefully translates to a street price of $600 or less.

Right now Walther does not have details listed for the PPQ M2 Competition on their website, but since everything but the barrel length and sight radius is the same as the service-size M2s, the product page should be enough for anyone interested in the five-inch M2 Competition.