Woman pulls gun on intruder who asks ‘Are you ready to meet God?’ (VIDEO) 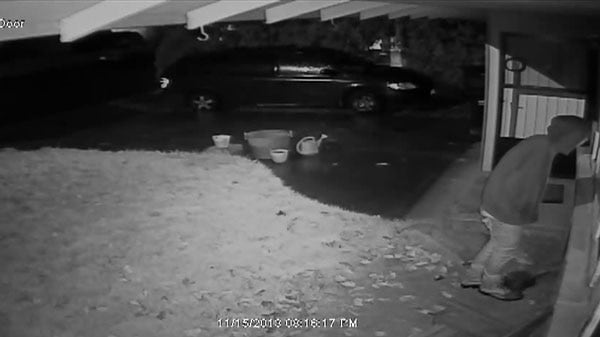 Creepy images of the intruder peering through the windows of a nearby home as children played inside with their babysitter. (Photo credit: KGW Portland)

A woman seemingly spooked off a man who followed her inside her apartment by pulling a gun on him Friday night in Milwaukie, Oregon.

Crystal McKinney told reporters that she knew something wasn’t right when the man followed her upstairs to her apartment.

“I backed up and I said ‘What are you doing?’ He said, ‘Are you ready to meet God?’” and that’s when McKinney ran to her bedroom to grab her gun, McKinney said. She pointed it at the man and said, “Get out of my house or I will shoot you.”

But McKinney explained that other than turning and walking out of her apartment, he had no reaction to her pulling a gun on him.

“He was straight-faced. It seemed like he didn’t know what was going on or why I had a gun,” she explained.

When he walked out, she followed him, still armed, closed the door and called 911. McKinney recalled how her adrenaline was pumping, leaving her hands and entire body shaking.

“As soon as I shut the door, I just broke down in tears,” she said.

But before police arrived, the man entered another apartment, then apparently tried to go into a nearby house. The home’s security video caught creepy images of the man peering through the windows, watching the children with their babysitter inside for several minutes. The man can then be seen attempting to open the front door, but once he discovered it was locked, he simply walked away.

However, at this point several neighbors had come together and found the man to hold him until officers arrived.

Police said that they are familiar with the man, whose name has not been released, and that he was currently undergoing a psychiatric evaluation.

The district attorney will determine whether or not the man will face any charges.

McKinney told reporters that over the next few days she would be soliciting other residents at the apartments in an effort to have security guards hired, in addition to making sure that everyone is willing to look out for each other.

She also said she was prepared to shoot the man if she had to, adding, “If it’s my life or somebody else’s, I am not afraid to hurt the person that’s trying to hurt me.”