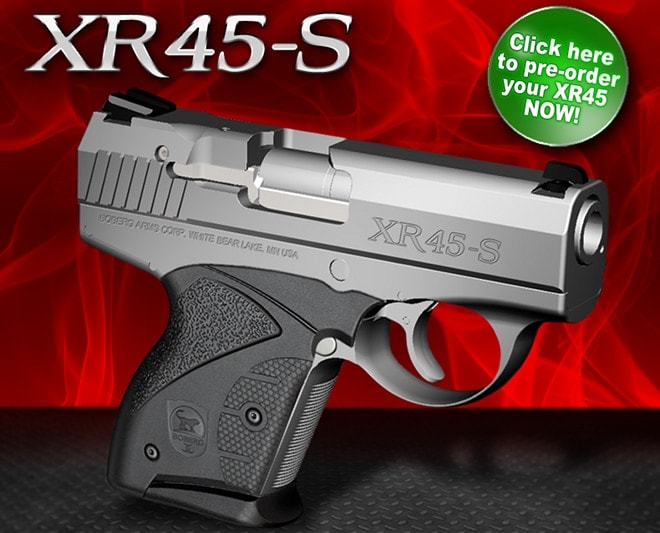 Boberg Arms is now taking pre-orders for the XR45-S, their upcoming subcompact concealed-carry pistol chambered for .45 ACP and rated for +P loads. This follows in the footsteps of a handful of extremely compact 9mm +P handguns.

This is likely the first of several Boberg pistols chambered for .45 ACP. The 9mm pistol comes in several different finishes and two different sizes. The -S models are the “Shorty” versions. Boberg also makes these handguns with extended barrels for even better external ballistics.

Pocket Guns and Gear has a lot of experience with these guns. We’ve also reviewed it on several occasions.

There is a lot that makes Boberg’s guns stand out from the crowd. They’re extremely unconventional single-stack pistols that have a bullpup-inspired design, a claw feeding and extraction system and a rotating locked-breech barrel. This allows Boberg to make very small handguns with much longer barrels than similar-sized guns that use conventional designs. 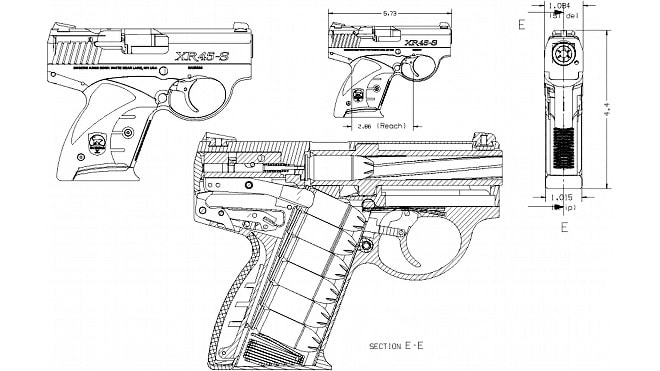 The design lets Boberg squeeze in about an inch of barrel length over traditional guns of the same size. This translates to significantly-improved muzzle velocities, more energy at the muzzle, deeper penetration and with hollow-points, better expansion. Because the bullets are fed using a lifter the magazines can be longer as well for increased magazine capacity.

Case in point: the Boberg XR45-S is roughly the same size as a Springfield XD-S .45, and yet it has a longer 3.75-inch barrel and holds one more round in the magazine. It’s actually slightly smaller than the XD-S; it’s shorter by half an inch and weighs less by about three ounces.

With its 3.75-inch barrel the XR45-S is likely to deliver near-service pistol ballistics in a package that can fit in a pocket. 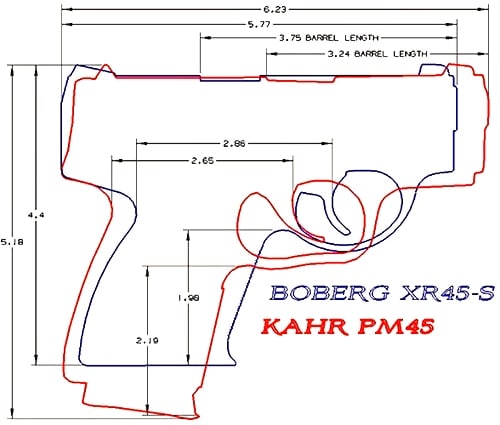 There are some things people don’t like about Boberg pistols. Because the cartridges are pulled out of the back of the magazine they are particularly ammunition-sensitive. They pretty much require  ammunition with hard crimps and cannelured bullets. Otherwise what will happen is the claw, which cycles rearward with the slide — that is to say fast and with a lot of momentum — will literally disassemble lower-quality ammunition. The bullet at rest stays in the magazine while the gun attempts to load the now-emptied case in a cloud of gunpowder.

Most ammo manufacturers simply make ammo that’s designed to to be pushed out of magazines, not pulled; only more expensive ammo is designed to keep together no matter how the cartridge is abused. Boberg maintains a list of approved ammo and as long as users stick to that list they will be fine.

What mostly makes people shy away from Boberg pistols is the sticker. They are high-quality guns made in small batches with the least expensive XR9-S priced at $995. For anyone pre-ordering the XR45-S will be priced at $1,195. After the initial run is over the prices is going to go up by a couple hundred dollars.

This is a premium pistol and it needs premium ammo. That being said, there’s just nothing else on the market like Boberg’s handguns and for that reason alone they have a very devoted following. If you’re thinking about pre-ordering an XR45-S head over to the Boberg website.

There won’t be a limit to how many pre-order Boberg takes but they will be delivered on a first-come first-serve basis.