This robotic deer was lifelike enough to lure Thompson to take a shot.

A Florida man was arrested Saturday morning after shooting at a robotic deer the Florida Fish and Wildlife Commission placed on the side of the road in order to catch poachers during the closed season in Myakka City.

Officers witnessed Brett Russel Thompson take the bait, as they concealed themselves in a nearby hiding spot, and shoot at the mechanical Bambi, Outside reports.

“He crossed a ditch and walked up toward the fence carrying a rifle,” the arrest report said. “He placed the rifle on the fence to steady himself and shot at the replica.”

Thompson was arrested and charged with taking deer during closed season, discharging a firearm from a roadway and taking deer from a right-of-way, the Washington Times reports.

Thompson confessed to officers he knew the hunting season was over. He also confessed he knew shooting deer from a roadway was illegal. He was released from jail after posting his $1,120 bail and has a court date scheduled for Dec. 12. If convicted Thompson faces a year in jail and a fine of $2,500. 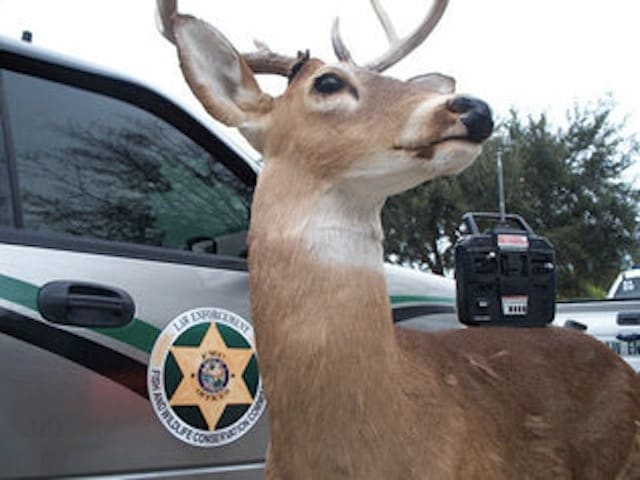 The FWC commonly employs the robotic deer. Some may consider it entrapment.

According to FWC spokesman Gary Morse, setting up what some may consider to be entrapment scenarios is not unusual.

“We set up details where we suspect poachers might be harvesting deer illegally,” Morse said. “We wait to catch them in the act.”

“It does help,” Babauta said. “Once word gets out that there is a fake deer out there, it deters the bad hunting.”

What are your thoughts? Right, wrong, or do you just want to see the mechanical deer in action?