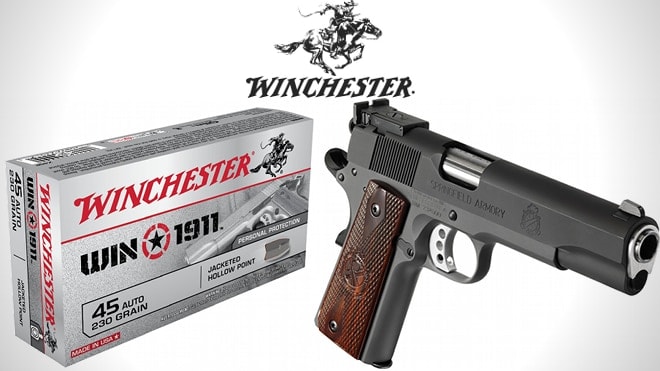 As a sort of brass and lead tribute to the venerable and much-loved 1911 pistol, Winchester has developed a pair of loads that are tailored specifically for the classic .45.

More than 100 years old the 1911 remains one of the most popular handguns of all time. Almost every major gun manufacturer makes a version of the 1911 and it’s come a long way since the first run produced by John Moses Browning.

“The M1911 pistol is one of the most recognizable and iconic firearms on the market. We at Winchester have undertaken significant testing to maximize functioning and accuracy with these new offerings to create an ammunition line that lives up to the name of the legendary pistol,” said Winchester V.P. Brett Flaugher.

That isn’t to say the design is ageless; the design has a bit of a personality that 1911 owners are happy to overlook in favor of the gun’s standard-setting grip and trigger. One of the more common quirks about 1911 is a preference for specific flavors of ammo.

The 1911 was designed to fire military ball ammo and as ammunition technology has advanced, there are more than a few .45 ACP loads that just don’t work with a lot of 1911s.

And that is why Winchester has engineered their Win1911 ammo. The ammo comes in two varieties, a flat-nose full metal jacket and a jacketed hollow-point. Ballistically the two loads are identical, both pushing 230-grain bullets at a nice round 880 feet per second. Proven bullet weight, proven projectile velocity.

The idea is of course to have two loads that shoot exactly the same, with one, the full metal jacket load, for target practice and training and the other, the hollow-point load, for self-defense. This way a person can get range time under their belt with the less expensive ammunition knowing it performs identically to the self-defense ammo.

To make them stand out, and maybe feed a little better, the bullets are also nickel-plated.

Of course, not all 1911s are picky about what they cycle reliably, but anyone who owns a 1911 — or any .45 ACP handgun, for that matter — can take advantage of this ammo combo. If you have a SIG P220, FNX 45 or even a Smith & Wesson 625, you can still easily benefit from having a matched pair of training and self-defense rounds.

Despite the ammo shortages that have run rampant nation-wide this year Winchester has not stopped developing new loads for hunting and self-defense.

Just recently Winchester announced their new Long Beard load for 12-gauge shotguns for hunting turkey. The load has an interesting and efficient shot cup that ensures tight, ethical patterns out to a game-changing 60 yards.

For hog hunters they also just expanded their Razorback line. These loads are designed to deliver deeper penetration and slower expansion to ensure that they are effective against the tough and resilient feral pig.