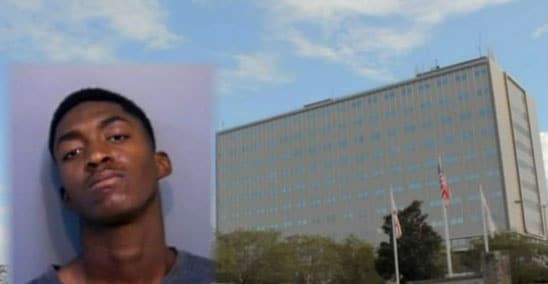 As White remains in the hospital recovering from the gunshot wounds, the District Attorney has requested that he be held with no bail. (Photo credit: FOX 10)

The family of a suspect who was shot by an armed customer while attempting to rob a Family Dollar store in Mobile, Alabama earlier this month told Fox 10 that the Good Samaritan should not have gotten involved and “just left the store.”

It was Tuesday, Nov. 12, when the armed citizen, whose identity has not been revealed, noticed 18-year-old Adric White wearing a mask and pointing a gun at employees towards the front of the store.

“He had the gun to his head. He had him on his knees,” the man said. “I drew my gun on him and I said ‘Hey, don’t move.’ At that point he swung around and before he had a chance to aim the gun at me, I fired.”

White was shot five times and transported to a local hospital where he is recovering and remains in police custody.

White was arrested in September for the armed robbery of The Original Oyster House, and was out on bond when he attempted to rob the Family Dollar store. Now the Baldwin County District Attorney’s Office has filed to have the original bond revoked. The DA wants White to remain in jail once he is released from the hospital and to prosecute him to the fullest extent of the law.

Authorities maintain that the Good Samaritan was justified in shooting White and that he broke no laws when he did so. But White’s family disagrees.

“If his (the Good Samaritan) life was not in danger, if no one had a gun up to him, if no one pointed a gun at him — what gives him the right to think that it’s okay to just shoot someone?” one relative told the Fox affiliate during a phone interview. “You should have just left the store and went wherever you had to go in your car or whatever.”

But the relative even admitted that she wasn’t aware of all of the facts surrounding both robberies.

When reporters asked her opinion on the teen’s involvement in robbing two stores in less than two months, she responded by saying, “We don’t know. Like I said, we don’t know anything. We only know what we’ve been hearing second hand through the news. I would not like to comment because I don’t know.”

Local media interviewed White’s parents, but they later called the station and demanded that the video not be aired.

White’s family also told reporters that he was hanging with the wrong crowd, needed help and didn’t deserve to get shot.