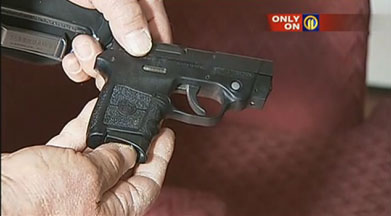 Perry said that he’s never had to pull his weapon before during the six and a half years he has had the delivery job, which he has as a second job to help support his family. (Photo credit: WPXI)

Three teens are behind bars after attempting to rob the wrong pizza delivery man in Donora, Pennsylvania, last Tuesday night.

The driver, Hal Perry, went on what he thought was a routine delivery just before 10 p.m. “I went to an address that looked legitimate to me,” Perry told WPXI. “I got out of the vehicle, and three of them came around the corner. One of them walked behind me and I knew something was wrong.”

Perry told authorities that one of the teens grabbed the chicken wings from him, while another searched his van and the third checked his pants for cash.

Perry believes that their intention was to take the food and any cash, drive off in his van and leave him stranded.

“I didn’t know if (the one searching me) had a knife so I took a couple steps back, bent over and drew my weapon. As soon as they saw that, they took off running. As they left they threw something. It turned out to be a pellet gun,” Perry said.

But although the teens didn’t get the cash they were after, they didn’t take off empty-handed either. Even with Perry’s pistol drawn, they ran off with the chicken wings, which would later prove to be instrumental in their capture.

Perry then called the police and was able to provide a detailed description of the three teens.

A short time later officers arrested Tyler Hall and Dorian Ellis, both 18-years-old, after they found them sitting on a nearby street corner chowing down on the chicken wings. The third suspect, whose identity was not released because he is a minor, was also later found across state lines in Ohio.

Hall and Ellis both face charges for robbery, criminal conspiracy, terroristic threats and loitering/prowling at night, and are being held with a $25,000 cash bond.

Apparently Perry never saw the pellet gun until after the teens were already running off, which was probably a good thing for them.

“I didn’t have to shoot. But if he had brandished the weapon, I would have had no problem shooting. That’s why I carry a weapon,” Perry said. “I think they were very surprised when I pulled the pistol.”

Perry admitted that he didn’t understand the thoughtless actions of the teens.