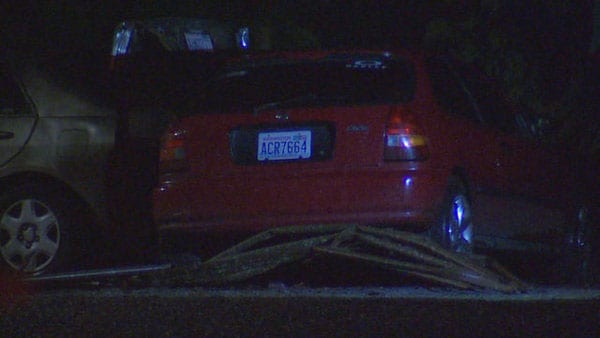 Neighbors say they could hear Mathews revving his engine before crashing through the gate. (Photo credit: King 5)

A 67-year-old homeowner shot and killed a man who broke into his rural home in Pierce County, Washington, late Monday night.

Around 11 o’clock Cole Mathews, 21, drove his car through a steel gate and crashed into several parked cars before pounding on the front door of a house, eventually breaking some glass and forcing his way inside.

When the homeowner and his wife first heard the loud banging, they thought it was an earthquake but quickly realized that it was someone breaking in. The man grabbed his gun while his wife locked herself in a bedroom and called 911.

But before officers could arrive, Mathews began attacking the homeowner, punching him repeatedly.

“I thought we were dead,” the man’s wife told King 5. She said her husband asked Mathews, who she described as having a “crazed” look, what he wanted, but he never spoke.

After receiving no response from Mathews and him continuing to attack the homeowner, he fired three or four shots, killing the intruder. When deputies arrived, they found Mathews’ body still inside the home and he was pronounced dead at the scene.

Authorities said that Mathews, who had no prior criminal record, “reeked” of marijuana. The medical examiner will determine if there were any other drugs in his system, which due to undisclosed physical evidence authorities suspected may have been the cause of his irrational behavior.

However, Mathews’ family told reporters that he would never had hurt anybody. They believe that he was involved in a car accident and had gone to the home looking for help.

Investigators do not know what prompted Mathews to smash through the gate and break into the home. There was no known connection to the homeowners.

The homeowner, who has a heart condition and has had multiple open heart and back surgeries, received minor injuries during the altercation but is said to be at home recovering.

Detectives said that they do not believe the homeowner will face any charges, as he acted in self-defense, but ultimately the decision is up to the prosecutor.