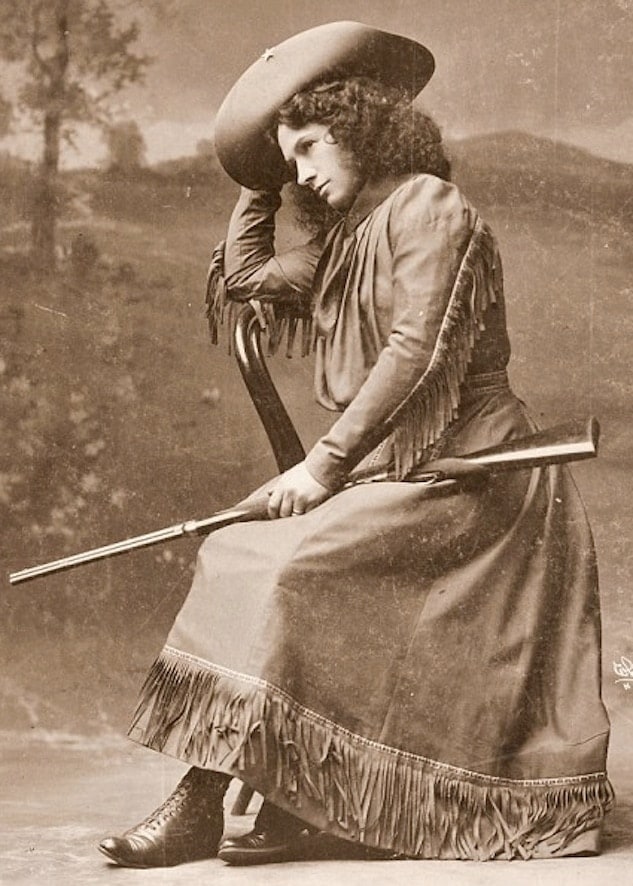 Famed marksman Annie Oakley was most famous for her trick o f“shooting a side-on playing card into the air, then hitting the individual pieces again as they fell to the floor from 90ft away.”

Famed Wild West sharpshooter Annie Oakley’s 130-year-old shotgun is up for auction with an opening bid of $100,000.

The 16-gauge Parker Brothers Hammer Shotgun has stayed in the Oakley family until this point in time and is over 130-years-old. In fact, it’s even older than a similar shotgun that belonged to Oakley sold in June 2012. So this particular firearm may very well be the one the deadeye referred to as “my first real gun,” according to Heritage Auctions.

This Parker 16-gauge Hammer Shotgun may very well be the one Oakley was referring to when she mentioned “my first real gun.”

With an opening bid of $100,000 the shotgun also comes with its original canvas scabbard.

The shotgun’s history has been chronicled in detail and its heavy use is evidence by the many repairs made by the Parker factory. According to Heritage Auctions, the weapon was returned several times, once “in 1883 for cleaning and repair; in 1885 to be adjusted and restocked and to have the “new model hammers” installed; and in 1897 to be once again restocked.” This amount of wear and tear on the shotgun is a testament to its build quality and the dedication Oakley had to her art.

According to the Daily Mail, the talented trick shooter is most notably remembered for “shooting a side-on playing card into the air, then hitting the individual pieces again as they fell to the floor from 90ft away.”

The Parker shotgun also comes with its original canvas field scabbard. If you are a huge Annie Oakley fan and looking for something else from the historical icon, check out her charm bracelet, also up for auction with an opening bid of $100,000.