I reviewed the DoubleTap earlier this week.  The thin .45 ACP is just a hair over half an inch wide.  Shooting the DoubleTap is almost as much fun as catching a fastball without a glove.  Almost.  But forget about the sheer joy and euphoria you may experience just after shooting it.  It does a job well. 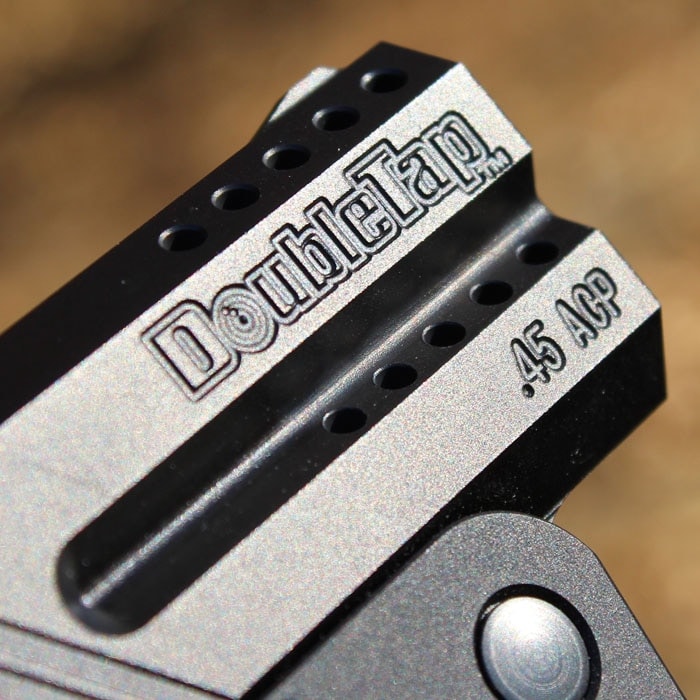 The over under of the DoubleTap. (Photo by David Higginbotham)

And the DoubleTap isn’t alone.  The market for subcompact .45s is getting competitive.  So here’s a look at some of what’s new and improved in the big bore small pistol market.

Let’s back up a bit and define what I mean by new.  I don’t have any exposed hammer single-actions in the list.  As one who regularly carries a Colt Mustang and a Springfield Armory Range Officer, I’m certainly not averse to new twists on the old single action.  And I respect the various efforts to trim down the 1911.  Still, for this list, I’m looking at more unique delivery methods for the .45 ACP.

There’s nothing new about the derringer, but what DoubleTap Defense is doing with the old form could be considered a major improvement.  The gun, despite its historic lineage, feels new.

And there are other innovations to consider.  Some, like their 1911 brethren, are chopped down versions of larger guns.  Some are working from the other direction and accommodating larger calibers.  All are rock solid options for backup guns. 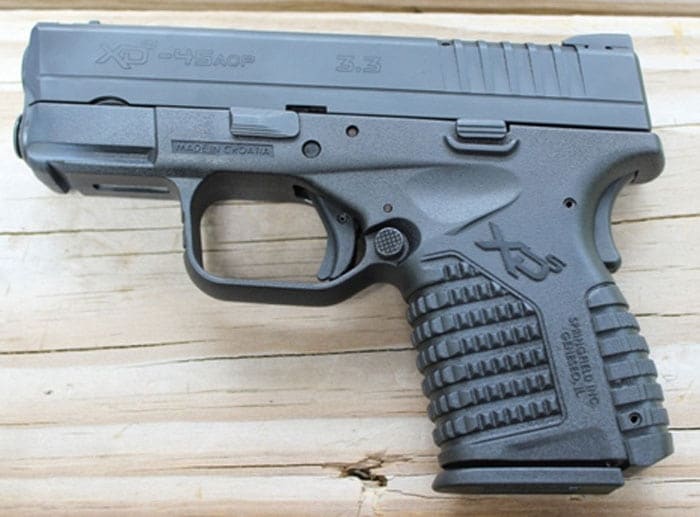 The XDS led the new pack of subcompact polymer .45s.  The 3.3 inch barrel is very functional.  The whole gun is only 6.3 inches long.  It is just under an inch wide.  The magazine, though, only holds five rounds.  Still, with an MSRP of $599, it competes well with some of the more high priced competition in this list.

The gun has a grip safety and a trigger safety, but neither require thought.  The gun disappears easily, and functions flawlessly.  This is the most accurate short barreled .45 I’ve ever shot.

An example: I was shooting (and missing) clays from the edge of a ravine not long ago.  The unbroken clays drifted down and thunked in a mud flat about about 100 yards below where I stood.  When I’d finished with the shoot, I loaded some slugs into the shotgun and tried to pick off the clays below.  I couldn’t connect.  When I’d run out of slugs, I pulled the XDS from my hip.  After a few calibration shots to calculate hold-over, I could break the clays with the XDS with little difficulty. 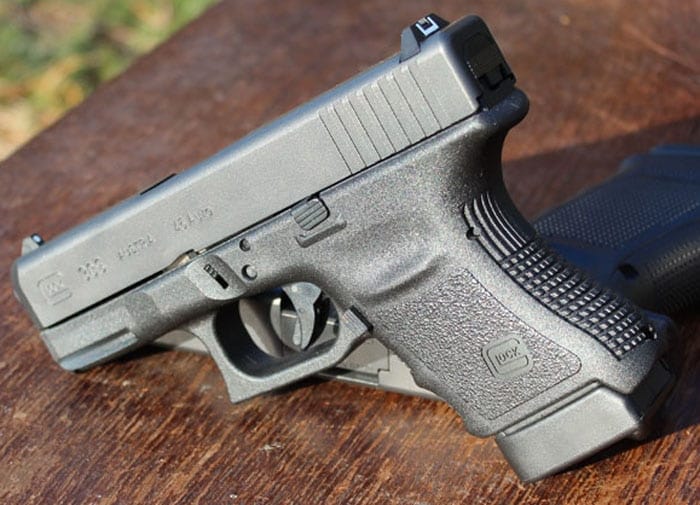 We shot the Glock 30s at SHOT Show last year, and then for a review shortly after.  It is impressive.  If you are a fan of Glocks, you will like the 30s.  I say that becasue it is clearly a Glock.  It is like all of the Glocks I’ve ever shot, only a bit smaller.  And a bit punchier.  It works flawlessly.

The real draw of the 30s is the magazine capacity: 10+1.  That smokes the XDS.  But this capacity comes at the cost of width.  While many of these guns are going to com in under an inch, the 30s won’t.  It is 1.27 inches wide, and about 7 inches long.

I’m going to make allowances for the extra size.  The Glock 30s may be the biggest in the list, but it may also be the most versatile gun, too.  It is small enough to hide, but large enough to use as a primary weapon, if you need to.  MSRP is $637. 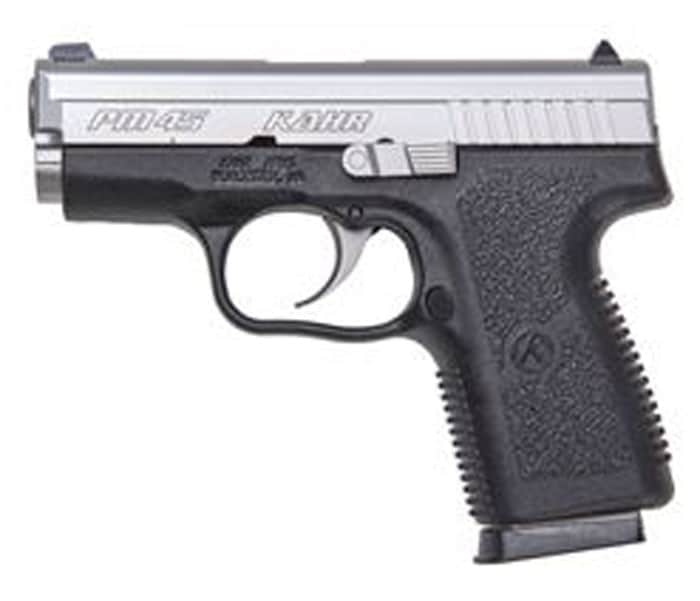 Kahr has some devoted followers.  Not as many as Glock, maybe, but I trust some folks who swear by these pistols.  These American made guns are very popular choices for backup.  And fans are about to get another reason to love Kahr.  The PM45, a pistol that has an MSRP of $855, is joining the CM line, which has a price of $517.

The CM line is very similar to the PM line, at least in appearance.  The economical versions do away with the extras.  Some of the milled parts will be cast.  Sights won’t be adjustable.  Even the rifling is done in a more economical way.  Will anyone complain?  I doubt it.  Anyone wanting the more extravagant Kahr can still pony up for the PM45.  If the CM45 is anything like the CM9, or CM40, the price tag alone will be enough to get some to start carrying. If you want something that’s really different, I’d suggest the Boberg XR45-s.  Boberg is developing a following for its odd twist on the bullpup pistol.  With the trigger farther forward (and the breech farther back), muzzle rise should be even more manageable on the XR45-s.

And the barrel is 3.75 inches, even thought the whole package is only 5.77.  That is more barrel in less length.  It is a single stack, so the magazine capacity is limited to 6+1.

The kicker here is the price.  Boberg is taking orders now for the XR45-s, and the going price is $1,195.  If you have money, this would be a really nice option.  If you don’t, stick around and see how the Boberg line changes things.  I haven’t shot one yet, but I will soon.  If you want to read more about how Boberg is shaking things up, click here. 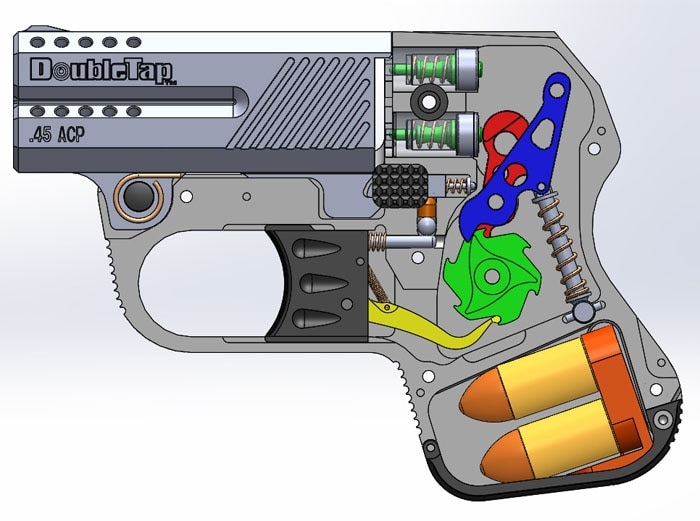 The guts of the DoubleTap (Photo credit: DoubleTap Defense)

I like the DoubleTap.  Here’s why: it goes anywhere.  It is shorts-and-a-tshirt concealed carry.  It can print in the pocket of your jeans and it still won’t look like a gun.  It is backup to your backup, no excuses, always ready firepower.  There’s something to be said for that.

You may want the 10+1 of the Glock 30s, but the two in the pipe could be more than you actually need.  You may have fun, as I did, seeing what you can hit with the XDS at 100 yards, but most defensive gun use happens much, much closer.

The DoubleTap is going to change the way we think about concealed carry.  It is so thin.  It does away with all impediments to instant accessibility.  And there’s a place for that.  At $499, it hasn’t been priced out of the market, either.

The term subcompact is sticky.  How small is does a gun have to be before we stop calling it a compact?  The debate goes on.  The Glock 30s is hardly a subcompact, by any definition.  But it wants to be, and it is easy to conceal.  And with 10 rounds of .45 in the magazine, it is going to be the logical choice for many.

At the other end, the DoubleTap is so very easy to conceal.  But it is hard to handle, and doesn’t offer many rounds.  Kahr may win the price war, though Boberg may catch the more discerning connoisseurs.  As for me, I’m not planning on parting from my XDS.  Yet.