Share
According to an exclusive from ABC, FBI agents believe dozens of suspected terrorist bombers – some of whom have sought to kill American troops – have slipped into the U.S. by disguising themselves as refugees.

ABC reports that in 2009 the FBI discovered one U.S.-based refugee with an insurgent past. FBI specialists linked fingerprints found on a cordless phone in Iraq that was used as part of a failed IED in 2005, to 32-year-old Waad Ramadan Alwan in Kentucky.

In video obtained by ABC, Alwan is seen “expertly field stripping what the FBI identified as a Russian PKM machine gun” while inside a storage locker on American soil. The other man in the video, who hands Alwan a Stinger missile launcher, is 26-year-old Mohanad Shareef Hammadi. 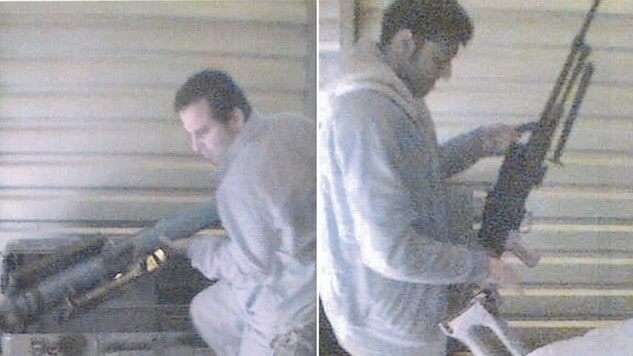 Alwan, right, and Hammadi, handle weapons inside a storage shed on American soil.

According to an ABC News investigation, the foreign terrorists managed to pass through the “flawed U.S. refugee screening system” undetected, even though both had been previously detained in Iraq, and in a 2006 interrogation, Alwan even confessed on video that he was an insurgent.

Now, hundreds of FBI specialists painstakingly sift through a collection of nearly 100,000 IED components, searching for fingerprints that may connect to other nationally based terrorists.

House Committee on Homeland Security Chairman Michael McCaul believes Alwan’s case may be just one among many others.

“I wouldn’t be surprised if there were many more than that,” he said. “And these are trained terrorists in the art of bombmaking that are inside the United States; and quite frankly, from a homeland security perspective, that really concerns me.”